Ugandans voted in an election on Friday expected to extend President Yoweri Museveni's time in power to three decades but which could turn nasty because the opposition wants street protests if the poll were deemed rigged. The campaign in east Africa's third largest economy was bitter, marked by widespread claims the ruling party has been paying voters to return Museveni for a fourth term.

At least two protesters were killed Thursday when soldiers opened fire on stone-throwing demonstrators in the Kurdish city of Sulaymaniyah as the unrest triggered by turmoil elsewhere in the Middle East reached the normally placid enclave of Kurdistan in northern Iraq. Forty-three people were injured when the Kurdish pesh merga fighters fired live ammunition at youths throwing stones at the headquarters of the region's dominant political party, the Kurdish Democratic Party (KDP), witnesses said.

Large protests have continued overnight in Libya following Thursday's "Day of Rage" against the government. Confrontations between security forces and protesters left two dozen people dead and many wounded on Thursday, according to Human Rights Watch. 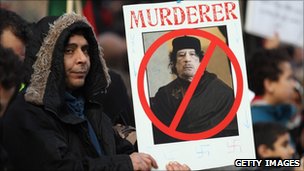 Posted by Paul Bagshaw at NOT THE SAME STREAM:

Leonie Mendo is from Cameroon. She came to the UK at the invitation of a man she met over the internet. He locked her up, abused her and forced her into prostitution. When she became pregnant she was discarded. Only then was she able to ask the police for help. But she had no papers. She asked to stay in the UK on the grounds that she deserved humanitarian protection. The immigration court did not believe her account, nor has it accepted the expert witness reports of a midwife, a psychologist and a rape crisis counsellor.

I have known Leonie for over two and a half years. She is a devout Christian and a woman of deep integrity. There is no reason why she should invent a story which is, in practice, so self-denigratory and so harsh as a history for her daughter. She has been entirely consistent in her account since I have known her and I believe her entirely. She is terrified about being sent back to Cameroon - because her family will find her and are likely to attack her too, because she is a single mother, because she has a visibly mixed-race child who has no father.

The Home Secretary has the discretionary power to allow a person to stay. That is now what we are asking for.

I emailed the publisher to ask if they'd received my manuscript; yes, they had and I should get a reply soon. Today I had a rejection letter. A very nice rejection letter but nevertheless.

Please pray for our friend, Jack, who is having a miserable OFSTED experience and the inspectors haven't even arrived at his school yet.

Full details at WHY DO WE HAVE TO DO THIS, SIR?

Japan, which hunts the giant ocean mammals under a loophole to a global ban that permits lethal "scientific research", has killed 172 whales this season, only about a fifth of its target, the fisheries agency said.