Security forces clashed with anti-government protesters chanting "change the power" in the Algerian capital of Algiers on Saturday. About 100 protesters were detained, according to the Algerian League for Human Rights, one of the main opposition groups that organized the rallies. The demonstrations were mostly peaceful, with police rounding up protesters in small groups to break up the crowds. 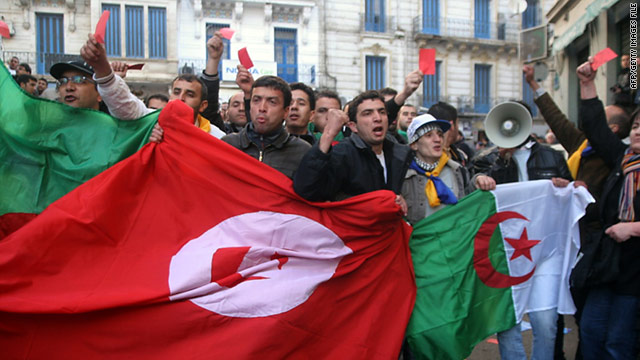 From THE WALL STREET JOURNAL:

Yemeni protesters and government supporters clashed briefly in the early hours of Saturday morning in the capital San'a. No injuries were reported.

The United States pivoted from delight at Egypt's revolt to hiking political pressure on arch-foe Iran Friday, charging that the leadership in Tehran was "scared of the will of its people." The White House said that Iranian leaders should give their people the same chance to express their will as Egyptians seized for themselves -- and noted that instead, Tehran had threatened to kill any protesters.

North Korea has ordered all its embassies to appeal to foreign governments for food aid in a sign of growing desperation in Pyongyang, according to diplomatic sources.

In November the WFP and FAO warned that the majority of North Korea's people faced continued hunger this year after harvests were affected by unusually bad weather. North Korea has been hit by repeated famines in recent decades, particularly when bad weather has exacerbated the effects of inefficient collectivist farming practices and a shortage of mechanisation. The situation was particularly acute in the mid-1990s, when between 600,000 and more than 2 million people are believed to have died. China, which has long served as North Korea's food supplier of last resort, faced its own food crisis as a result of a sustained drought, and that may have an impact on Beijing's food deliveries.

Prayers for the communities of El Paso, TX and Ciudad Juarez, Chihuahua as they morn the lives of two US teens visiting a teen friend in Juearaz where the three were all murdered while visiting a car dealership.

Thank you all for your prayers for May Casey. I buried her today. A tremendous loss for our little flock. May was 60 and died very quickly and peacefully from ovarian cancer. She was due to fly out today for a holiday in Dubai. I know she's checking in somewhere else.

The cat, named Bunky, had to be put down today. He was Kate’s cat and I was fond of him because he was so big and funny and pretty.

Five years ago tonight I was sitting on my couch when the phone call came from my brother, to tell me that my mother had died. 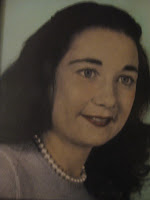 It seems, this week, that about every other word out of my mouth has been a quote of something my mom said often, or would have said. She is very much with me. And the experience of losing D. this week, who was so like my mom in personality and temperament, has brought it all home that much more. So. Praying today in gratitude for this extraordinary woman. She is with me still.

I ask your prayers for Sandi.

"Will you please include me on your prayer list? Things kinda rough right now. Feel very dark. Love, Sandi."

May Light surround her and radiate from within her.

For my nephew Jay who had part of a root canal done yesterday but it needs to be finished next week.

For Diane who has challenges on multiple fronts right now.

For my sister Shirley who recovers from the fender-bender but has a lot of medical catch-up to do.

For my grandniece Hannah who celebrated her birthday yesterday (12 going on 16, says her grandmother).

For myself in that I came down with a chest cold yesterday. Stayed home today and spent many hours sleeping. Plan to continue that all weekend. Among the many with no paid sick live, so I need to get back to work as soon as prudent. Pray for healing and prudence.

For Nate and Ken who move through difficult transitions.

A new era dawned in Egypt on Saturday as this nation of 80 million — and hundreds of millions beyond its borders — began to absorb the fact that an 18-day mass movement of nonviolent protest brought down a 30-year military dictatorship and renewed the country’s lease on life. Thousands lent a hand to a volunteer clean-up of Tahrir Square, the epicenter of the new Egypt. Sanitation trucks deployed on its outskirts and soldiers removed some of the barricades surrounding the square. 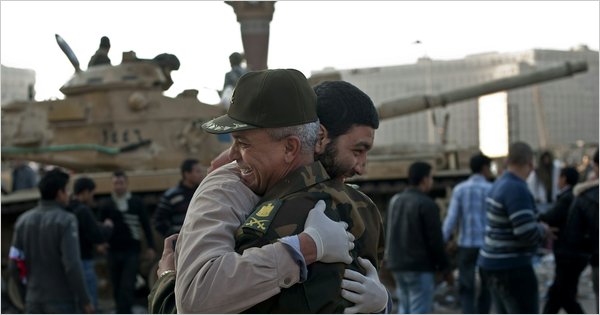 Two hostages freed by a Colombian rebel group reunited with their family members in the country's capital Friday.

Speaking to reporters, one of the freed hostages called for renewed dialogue between the government and insurgents.

"Humanitarian exchange is the first step toward a friendly understanding, which permits the return of our brothers deprived of their liberty," politician Armando Acuna said shortly after he was released by the FARC leftist guerrilla group Friday.

Marine Henry Lopez Martinez was also released Friday and met family members at an airport in the country's capital.

"This is the most beautiful moment of the liberations, the loving reuniting of the families. For this, all the effort is worth it," former Sen. Piedad Cordoba, who helped coordinate the humanitarian mission to free them, said in a Twitter post.