A 12-year-old boy in a school uniform blew himself up at a Pakistani army recruitment center Thursday, killing 31 cadets.

A suicide bomber posing as a dairy deliveryman struck a Kurdish security headquarters Wednesday, setting off a series of rapid-fire attacks against the oil-rich Iraqi city of Kirkuk that killed seven and wounded up to 80 people. Within minutes, two more bombs exploded nearby, sending dark plumes of smoke into the clear winter sky and ending a six-month lull in violence in a city rife with simmering ethnic tensions located 290 kilometres north of Baghdad. 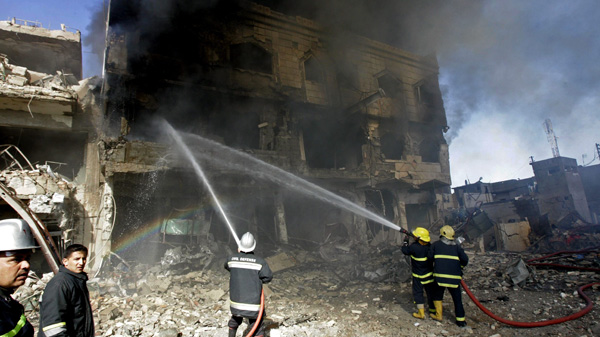 As Egypt’s uprising entered its 17th day on Thursday, bolstered by labor strikes and worker protests across the country, a senior official in President Hosni Mubarak’s embattled government was quoted as saying the army would “intervene to control the country” if it fell into chaos.

“If chaos occurs, the armed forces will intervene to control the country, a step which would lead to a very dangerous situation,” he was quoted as saying.

IT at THE FRIENDS OF JAKE will be interring her father's ashes this weekend.

Please pray for D who died recently and for Cecilia at (UN) CLOSETED PASTOR, who was her friend and pastor until the end.

Posted by Jim at JIM'S THOUGHTS:

My younger son and I attended a wake this weekend. The sister of a dear friend was murdered. Her killer shot her, another woman and eventually himself.

Posted by the cajun at ON TRANSMIGRATION:

Feeling a little better this afternoon though the cough is still deep and painful. This isn't the dreaded flu that everyone's talking about. No, this is a demon rhino-virus that takes you to the mat and keeps slamming you back there each time you try to rise. Not 100% on my feet - but better than Monday.

India and Pakistan are set to announce a set of seven conversations under a renewed engagement process. This will signal the resumption of talks on all outstanding issues, including Kashmir, that had been frozen after the 26/11 attacks. These talks will take place in “quick succession” with the aim to have them completed within the next three months, followed by the visit of the Pakistan Foreign Minister in July.