From THE BIRMINGHAM MAIL:

A union representing a former Midland vicar seeking damages against the Church of England over claims he was bullied out of his home and job has accused the church of using delaying tactics after his case was adjourned by nine months.

Revd Mark Sharpe, is seeking damages against the church after alleging it failed to provide him with protection from harassment while he was posted at Hanley Broadheath, near Worcester, at the end of 2009. He has claimed that he and his family suffered more than four years of abuse at the hands of parishioners. Incidents included their pet dog being poisoned, car tyres being slashed, central heating oil being stolen and internet and phone connections being cut.

His case against the church was due to be heard at a Birmingham Employment Tribunal this week. But it was adjourned after the church allegedly submitted thousands of pages of legal documentation to Mr Sharpe’s legal team just days before the hearing.

Union spokeswoman Rachael Maskell said: “The church has had nearly three years to make its disclosures in this very serious case, and waited, cynically, to just a few hours before the proceedings to unleash mountains of documents on the tribunal, ensuring that Mark and his lawyers have no time to study these papers. The bishops are not above the law and should be on the side of the oppressed. Delay in such a sensitive case has caused great pain to Mark and his family.”

Sam Setchell, spokeswoman for the Diocese and Bishop of Worcester, called the accusations “highly inaccurate and extremely misleading” and said the tribunal documents were disclosed in good time. She said: “We believe there is no legal basis for this claim."

They will be claiming victory but they will, in the end, lose everything. Either they are too dumb to realise that such displays of uncharitableness are exactly what has turned fair-minded, good English people off the church or they just don't care because "they're alright, Jack." I fear the latter may be nearest the truth. 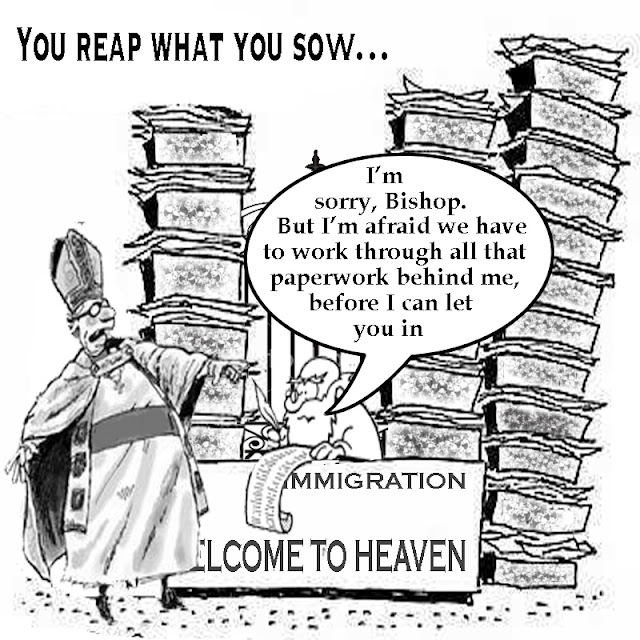