A Somali soldier opened fire on a crowd in Mogadishu on Monday, killing at least 17 civilians and injuring scores, hospital sources and witnesses said. The soldier triggered a high-calibre anti-aircraft gun mounted on top of a truck, and a hail of bullets ripped into the crowd after it jammed, some witnesses said. A security official, Mohamed Ali, said authorities were investigating reports from some witnesses that the soldier set off the gun by accident.

A volcano in southern Japan has erupted again, damaging homes in surrounding towns. After the latest eruption at Shinmoe Peak, the Japan Meteorological Agency has extended the exclusion zone around the crater to 4km. Experts fear lava could now spill out of the crater as pressure increases from within the the volcano's lava dome, leading to further blasts. Over 400 residents in the town of Takaharu, located at the foot of volcano Shinmoe Peak, have been forced to stay overnight at temporary evacuation centres. 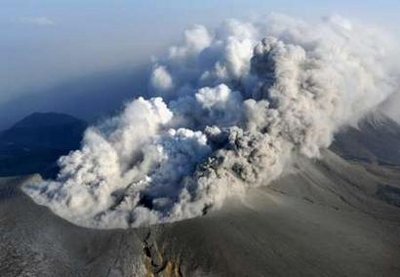 It has been announced and confirmed over Twitter that the last remnants of the internet still in operation in Egypt have been shut down. It has also been said that mobile phone nets are beginning to be shut down as well. Earlier in the day, several Al Jazeera reporters had been arrested, and then released, but their equipment confiscated. In other words, the Egyptian regime under Mubarak and the army are attempting a complete, utter shutdown of information and communications.

This morning, I heard of the passing of Sam Caldwell, a priest in our diocese. Sam was a gentle soul who served at my church Trinity in Reno for many years after his retirement as rector in Carson City.

Posted by David G. at THE HEARSE RIDE:

I haven't been on here since December. I sure could write about my failing life with all the shit that keeps happening, but I don't want to bore anyone.

A very good friend of OCICBW... underwent some medical tests at the end of last week. The results could have easily shown something really nasty but they only showed something unpleasant but liveable with. That sometimes the worst does not happen, we praise the Lord.