Nelson Mandela, the beloved but increasingly frail hero of South African democracy, remained hospitalized for a third day on Friday for what his foundation called “routine tests.”

COMMENT: It is only to be expected that a 92 year old man will spend some time in hospital. Hopefully these "routine tests" are just that and Nelson will soon be back home with his family enjoying the rest of his life. But the heroes of South Africa's successful campaign for democracy, Nelson Mandela and Desmond Tutu are both not in the best of health and one day they will not be with us. We pray that the people of South Africa will have the confidence to continue their commitment to justice and equality even after they have said their farewells to those living symbols of their great achievements so far. 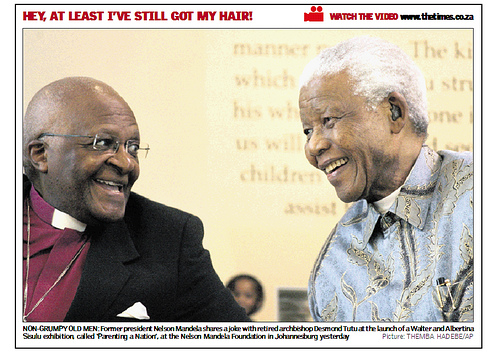 BAGHDAD - Violent protests erupted in a Shiite neighborhood here Thursday after a powerful car bomb ripped through a funeral ceremony, killing 48 people and wounding 121 in the latest in a string of attacks across the country that is destabilizing Iraq's new government even before it has completely formed.

We continue to pray for all those effected by the brutal assassination of Ugandan LGBT rights hero, David Kato. We rejoice that so many politicians have immediately denounced this obscenity and the institutionalised hatred that made it not only possible, but inevitable. We pray that religious leaders will find the godliness within themselves to not only join in with this chorus of outrage but, especially Rowan Williams who is, at present, very much part of the problem,  but start behaving in a way that will reduce the chances of it happening again.

Christians in northern Sudan flock south ... [Andrew Gerns, Episcopal Cafe] Reuters reports that many Christians who live in northern Sudan are flocking south in anticipation of independence there, but are also driven by fears that the north could become an Islamic state governed by Shariah law.

Murders this past week in the New Orleans metro area:

One other body was found this week, but the coroner gave no indication of a cause of death--simply "decomposed body" near Read Blvd. You may choose to include a "known only to God" or not.

Posted by Mark Brunson at
ENOUGH ABOUT ME: AN AUTOBIOGRAPHY:

Prayers for the W. G. family, staying with us this week, who come to wait for a child by induced labor which will either be stillborn or die quickly in order to save the mother's life.

Please pray for ZsiZsi, cousin of AW. Zsi Zsi "passed this life on her own terms" January 22 in London. She was a wonderful, extremely hospitable lady with larger than life personality who will be sorely missed by those (including some of the greatest in the land) to whom she was both a guide and friend. We pray especially for her four grandchildren and the rest of her family.

Please pray for the mother of my friend, Father Kevin. She was taken into hospital yesterday with probable heart problems and Kevin has driven straight down from Newcastle to Nottinghamshire to be with her.