It's the primatial, silly season again. The Grand Tufti is throwing a party in Dublin but a load of his mates won't be going because he's gone and invited a girl.

Basically, the sulky archbishops won't attend any church gigs unless they get to look at the guest list upfront and have the right to blackball anybody on the list who doesn't pass their acceptability test. They like to claim that this test of theirs is based on good, Biblical teaching, which it may or may not be. However, the actions they take if they don't get their own way are not only non-Biblical, they are actually completely opposite to Biblical teaching.

Hospitality is probably the most defined duty in Jewish and Christian scriptures. In the Old Testament, failure to provide hospitality to friend or stranger is a major sin. It goes beyond religious commandment as it is a cornerstone of the social life of the community. A man who offers unconditional hospitality, such as Tobit, is regarded as a good man by the good people of his community. The man who refuses to do his duty in providing hospitality is regarded by the righteous as an enemy of God, a fact that is emphasised over and over again the writings of both the major and minor prophets. In the New Testament Jesus takes the already generous duty of hospitality incumbent on God's chosen people and increases its remit to apply to absolutely everybody. He eats with sinners and he even offers bread to the man whose betrayal will lead to his crucifixion.

The bishops boycotting the primates' get together in Dublin are enemies of God when they take it upon themselves to restrict the hospitality collegially offered to their colleagues. But, for them, there is a Biblical sting in the tail of their actions that may end up with them being actually cast out of the kingdom of God.

The arrogant primates of the Anglican Communion who put prejudice before hospitality are placing themselves in the position of those who behaved inhospitably to Christ's disciples. It is unlikely that "the girl" the Grand Tufti has invited to his party will wipe dust off her feet no matter how much she is insulted, because she is a Christian who takes the words of Jesus very seriously, in deed. But God might. If God deduces that in not showing hospitality to those God's son died for, the schism minded bishops are disrespecting the son, then who knows what God might do. And if what God might do is anything like what Jesus said God might do in such a situation then the gatekeepers could be spending eternity gazing up from hell at the bosom of Abraham. Of course, these Biblically based boycotters won't be worried about this in the slightest. These words of Christ are recorded in the Bible and they don't appear to have read that particular book; at least, not any of it after Leviticus. 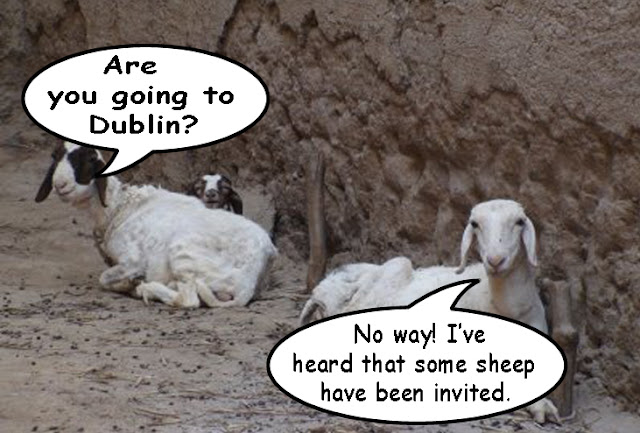