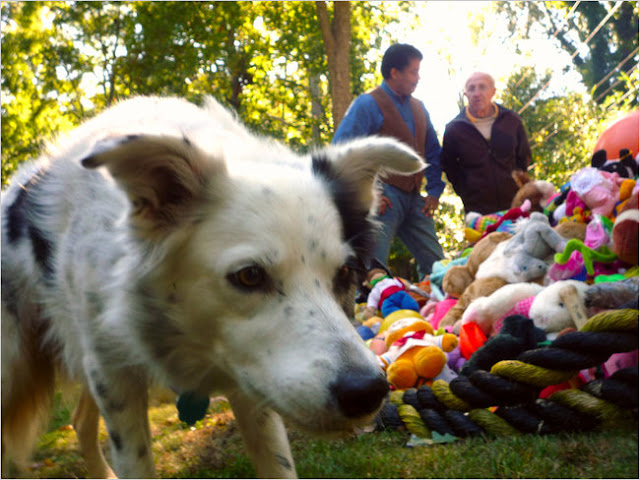 Chaser, a border collie who lives in Spartanburg, S.C., has the largest vocabulary of any known dog. She knows 1,022 nouns, a record that displays unexpected depths of the canine mind and may help explain how children acquire language.
Enlarge This Image

Chaser lives with John W. Pilley, a psychologist who taught for 30 years at Wofford College, a liberal arts institution in Spartanburg. In 2004, after he had retired, he read a report in Science about Rico, a border collie whose German owners had taught him to recognize 200 items, mostly toys and balls. Dr. Pilley decided to repeat the experiment using a technique he had developed for teaching dogs, and he describes his findings in the current issue of the journal Behavioural Processes.

He bought Chaser as a puppy in 2004 from a local breeder and started to train her for four to five hours a day. He would show her an object, say its name up to 40 times, then hide it and ask her to find it, while repeating the name all the time. She was taught one or two new names a day, with monthly revisions and reinforcement for any names she had forgotten.

Dr. Pilley does not know how large a vocabulary Chaser could have mastered. When she reached 1,000 items, he grew tired of teaching words and moved to more interesting topics like grammar.

One of the questions raised by the Rico study was that of what was going through the dog’s mind when he was asked to fetch something. Did he think of his toys as items labeled fetch-ball, fetch-Frisbee, fetch-doll, or did he understand the word “fetch” separately from its object, as people do? He addressed the question by teaching Chaser three different actions: pawing, nosing and taking an object. She was then presented with three of her toys and correctly pawed, nosed or fetched each one depending on the command given to her. “That experiment demonstrates conclusively that Chaser understood that the verb had a meaning,” Dr. Pilley said.

The 1,022 words in Chaser’s vocabulary are all proper nouns. Dr. Pilley also found that Chaser could be trained to recognize categories, in other words common nouns. She correctly follows the command “Fetch a Frisbee” or “Fetch a ball.” She can also learn by exclusion, as children do. If she is asked to fetch a new toy with a word she does not know, she will pick it out from ones that are familiar.

COMMENT: As somebody who has had the honour of living with border collies for nearly 52 years this surprises me because of the numbers involved, but that is all. I long ago came to the conclusion that dogs, and many other animals, have the same potential for language as human beings, that the thought processes needed for thinking and communication are already in place - they are not something unique to humans and evolved well back in the tree of life.

I think it is only a matter of time before somebody breeds a basic voice box into a dog or an ape and we are chatting together like long lost friends. That will be a real wake up call to humankind and we will have to throw most of our philosophy, biology and, above all, theology books in the bin.

How do I know this will happen? Because it is possible and because my youngest collie talks to Mrs MP and myself all the while. And she gets so cross that we are too stupid to understand what she is saying. This claim is not anthropomorphism, it's just how things are as anybody who has lived with dogs, and who has eyes to see and ears to hear (which rules out a lot of scientists, especially those researching animal behaviour) will tell you.

There is a video of chaser outsmarting the average X Factor contestant at the newspaper's website.