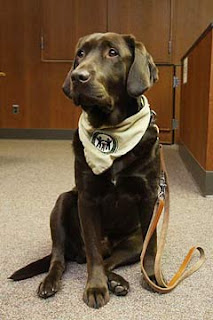 Amos, a kind and lovable chocolate Lab in Michigan sometimes puts in long days at the courthouse. He's not sniffing for bombs or patrolling the grounds, but he is protecting and serving. Amos works as a canine guardian and comforter of sorts and helps reduce anxiety for children who have to appear in court. He has been trained to sit patiently near children for hours as they either wait to take the stand or testify in court. Recently he accompanied two young victims who each testified for more than two hours against a defendant in a sexual misconduct trial.

The dog is part of the Canine Advocacy Program, the first of its kind in Michigan, and its services are offered at no cost to law enforcement or the courts. The program is funded by donations. Similar programs exist in California, Washington and Florida.

Not everyone is as positive about the role of animals in the courtroom. One prosecutor cited concerns about jurors with allergies or a fear of dogs.

For being there, Amos is our:

For being a dickhead, the prosecutor mentioned
in the article is our dickhead of the day.