Polish firefighters dodged treacherous sheets of ice in a risky after-dark rescue of a terrified deer stranded on a floe in the Baltic Sea, a spokesman said Wednesday. The rescue team faced serious hazards navigating among the sharp ice sheets but managed to save the drifting animal at the "last moment" after dark on Tuesday. TV footage showed the team of four steering through the plates by boat and using flashlights to find the deer, wrap it in a blanket and carry it back to shore.

"It was extremely difficult to reach it because the ice held us back. It was frightened, jumped into the water and tried to escape but we managed to get it on the boat" said their spokesman, Waldemar Bogatko. 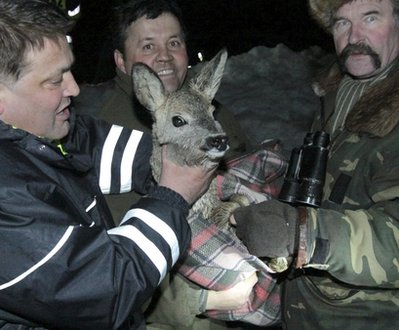 Hang on a minute! Isn't that Skippy, the bush kangaroo?