From THE ATLANTA JOURNAL-CONSTITUTION: 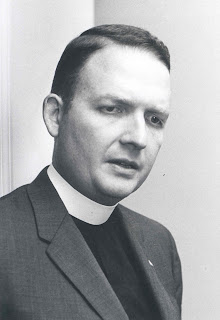 Treating everyone fairly, regardless of race, was a tradition in John Morris' family. Growing up in South Georgia, he knew that his great uncle, Charlton Wright, was shot to death in 1930 by a neighbor who was incensed by Mr. Wright's even-handed dealings with African-American customers and employees at his store in Brunswick. So it should have come as little surprise when, three decades later, the Rev. Morris, by then an ordained Episcopal priest, left his first and the only parish in Dillon, S.C., to become an Atlanta-based civil rights activist.

In 1960 he co-founded and became the first executive director of the Episcopal Society of Cultural and Racial Unity, which the Rev. Martin Luther King Jr. lauded in 1964 for its "great and significant work ... arousing the conscience of so many people on this question of racial injustice."

"John made a lot of Episcopalians mad in creating ESCRU," said NAACP President Emeritus Julian Bond of Washington, "but in doing so, he also made the Episcopal Church as a whole a major player in the civil rights struggle, creating a gateway for many Episcopalians to get involved and to lead."

Not one to mince words, even when talking about his church superiors, the Rev. Morris denounced the Episcopal bishop of Alabama, Charles Carpenter, in 1960 for condemning civil disobedience as "just another name for lawlessness." Bishop Carpenter and other churchmen who resisted the equal rights movement, he said, were merely "chaplains for the dying order of the Confederacy."

The Rev. Morris' first wife, Patsy Pratt Morris, was a nationally recognized crusader against the death penalty and a co-founder of the Atlanta chapter of the American Civil Liberties Union. She died in 1997.