Three Anglican bishops who are converting to Roman Catholicism have taken holy communion at Westminster Cathedral, with three ex-Anglican nuns.

Ex-bishop of Ebbsfleet Andrew Burnham, the former bishop of Richborough Keith Newton and John Broadhurst, previously bishop of Fulham, oppose women bishops. They are expected to be ordained as Catholic priests on 15 January.

Since General Synod voted for the ordination of women back in 1992, Anglo-Catholicsm in England has been dominated by its reactionary element. At the beginning the reactionaries were so powerful that many of us, who were supportive of equality in ministry, were made to feel so unwelcome in our "high" churches, that we were forced "out of the club." But over the years there has been a steady increase in the number of catholic minded, but inclusive, priests, male and female, who have found it possible to get posts in real Anglo-catholic parishes. Now, many of them even find it possible to visit places of extreme intransigence such as the shrine at Walsingham and they have founded their own societies in which they (again, male and female) are supported in their catholic disciplines. The variety of opinion within Anglo-Catholicism in England is greatly under-reported, no doubt due to the fact that angry misogynists make better copy than peaceful, loving priests who just want to quietly get on with their job within the church they love and do not regard as inferior to any other denomination.

However, now that the blusterers of the anti-women caucus are leaving the Church of England for the place they have always regarded as the only true church, the nature of the catholicism that remains will change considerably. Those catholic priests (male and female) who desire a truly catholic dispensation within the Church of England, one that is truly catholic in its universal and inclusive desire, will now make up a much larger proportion of the catholic clergy. Gradually, but faster than in the past, these priests and bishops will become an equal, and then dominating, voice within Anglo-catholicism and then there will be plenty of opportunity for catholic renewal that is truly Anglican.

Our God of amazing coincidences who, through his Spirit  has encouraged his church to face up to the injustices it has perpetrated against gay people so soon after encouraging it to seek justice for the women in its ranks, has made this new catholicism possible. Not all gay catholics in the Church of England live in denial all their lives. Many of them are intelligent and self-aware enough to realise that opposing the priesthood of women is based on exactly the same magical nonsense and faulty logic as opposition to the priesthood of gay people. Some of these gay priests may have felt uncomfortable with it to begin with but now they understand and accept that their battle is inextricably linked to the battle the women have fought and are still fighting. 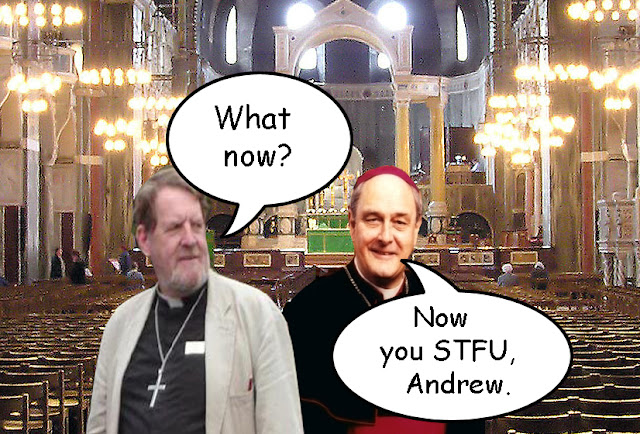