Unemployment is leading to an increase in mental health problems such as depression, panic attacks and self loathing among young people. The Prince’s Trust’s new Macquarie Youth Index reveals that just under half of young people not in work (48%) say that unemployment has caused problems like self harm and insomnia. It found they were more likely to self harm or suffer panic attacks 12 months into unemployment. The index reveals that 16% - or one in six young people – have found unemployment as stressful as family breakdown, while 12% say they have suffered from nightmares as a result of their joblessness.

The findings are based on the responses of more than 2,000 unemployed 16 to 25-year-old NEETs (an acronym for those ‘Not in Education, Employment or Training’).

COMMENT: Making somebody redundant is more aggressive and damaging than punching them in the face. It is an attack on the person which almost always results in long term psychological and physical damage to the person removed from employment.

It would be unreasonable and unworkable to make the sacking of somebody a criminal offence of the gravity that the harm caused should merit. But, it would not be unreasonable or unworkable for society, especially the government and employers, to take on board the reality of the harm caused by depriving a person of employment and, at the very least, relate to the unemployed as victims of an aggressive act against their person, and to show them the respect and concern that is (should be) shown to victims of violent crime.

For a start, the welfare agencies in the UK, which are controlled by our government, should stop treating their clients like scum. At the jobcentre I attend, even though they may keep you waiting for hours, they will not allow you to use their toilet facilities. Once recently, I had to stop an interview half way through and walk half a mile to the nearest public convenience before returning to the jobcentre to complete the interview. I assume the reason for this obscene attitude is because they believe that ALL unemployed people will crank up in the loos, but that simply ain't the truth in reality. Also, the interviews at jobcentres are inquisitorial with the client having to prove that they have been looking for work, with fines being imposed if the interviewer is suspicious that they haven't. Of course, a very small proportion of jobseekers will be swinging the lead, but that doesn't mean that we should all be treated as potential criminals. It's like arresting everybody who walks into a retail store for shoplifting.

Secondly, employers should be held more accountable for their actions and, if the need for redundancy is down to the actions of management, then management, not the powerless workers, should be punished. Having to make people redundant because of the incompetence of senior staff should be regarded as being of the same type as criminal negligence. Employers should be licensed and if they are proved unable to look after their workforce then they should have that license to employ taken away from them. This would bring the concept of "actions have consequences" home to those cold-hearted sociopaths who see redundancy notices as nothing more than a way of sweeping a problem of their own making under the carpet.

Thirdly, the state should pay unemployed people, at the very least, the minimum wage based on a forty hour week and the unemployed should be given an honoured place in their communities. If it wasn't for the unemployed, high-earners would not be in such well-paid jobs. Every time a fat cat takes out his or her wallet they should think on this and give those responsible for their comfortable life the respect due to them. 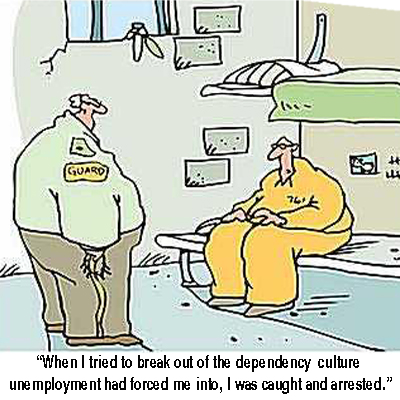