From THE DALLAS MORNING NEWS: 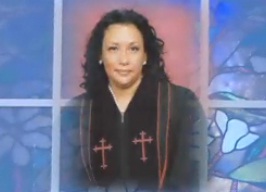 Southern Dallas pastor, Sandra McGriff, who, with her husband, Weldon, recently founded the Church of the Living God on Lancaster Road, spent much of Christmas in jail after being accused of breaking into an east Oak Cliff home.

On Friday evening, after a neighbor called police, officers arrived at the property and found a broken kitchen window and saw McGriff carrying two fur coats out a back door of the home. They also saw a laptop computer and three purses in the back seat of her blue Jaguar.

McGriff told officers that a friend had sent her to pick up her coats and that her arm was injured because she could not find a key under the doormat and had to break in through the window. Police called the resident, Serita Agnew, who told them she had not given anyone permission to go into her house or take her property. She also said that McGriff had called her to talk about an hour before the burglary was reported. During that conversation, Agnew told McGriff she was away from home visiting her daughter.

In a video posted at CONSERVATIVE BABYLON, Pastor Sandy explains how this has all just been a misunderstanding.