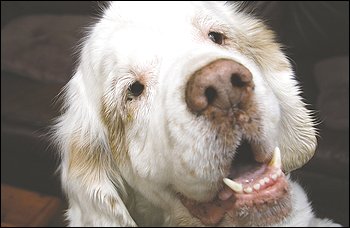 Willie Wonka is a Clumber Spaniel who lived in Portsmouth, Virginia. He was a retired show dog living the good life with his owners until, on December 21, 2009, he disappeared from his backyard. His owners notified the local humane societies, local police, and Clumber Spaniel Rescue. They posted flyers in their neighborhood, posted notices at the veterinary offices, and spent countless hours driving through neighborhoods looking for him. After no luck finding their dog, the only conclusion Willie Wonka’s family could come to was that he had been stolen. Even still, they never gave up hope that they would see their dog again.

On November 20, 2010, a stray dog was turned into the Tri-County Animal Shelter in Hughesville. It was a Clumber Spaniel. He was in rough shape. He had patches of hair missing, he was very dirty, and it appeared that he may have had an eye infection. The dog waited and waited for his owner, but nobody came for him. The shelter staff listed him on an “At Risk” list.

The shelter's at-risk list includes a photograph of each dog in danger of being euthanized and as much background information as the shelter staff can muster. The list is e-mailed to animal rescue groups and other dog lovers.

Terry Walker, an office manager for a veterinary hospital in Calvert County, was on her computer at home when the list arrived. She said one dog in particular stood out - a sad- looking canine that only someone with an extensive knowledge of dogs would recognize as being of the rare Clumber spaniel breed. Walker just happened to be one who knew.

After a quick Internet search, Walker found an organization called Clumber Spaniel Rescue of America, clicked on the mid-Atlantic region and forwarded the dog's photograph to the three contacts whose names were listed. On two of those e-mails, the photo attachments Walker sent could not be opened. The third e-mail wound up in the spam folder of Sally Day, who was at home in Washington Crossing, Pa.

Day had been up late on her computer killing out potentially harmful e-mails. Usually, she just deletes them without looking. But this time she didn't.

"A voice said, 'Open it,' and the hair stood up on the back of my neck," Day recalled. "The e-mail was from a stranger, and there was a photograph attached. I instantly thought I recognized the dog. I said, 'Oh my God, that's Karen's boy.' "

Turns out, Karen Martin and Sally Day are old friends.

Day, who also owns a Clumber spaniel, said she called "100 times" until Martin, who had been asleep, picked up the phone. Day e-mailed her the photo, which was fuzzy, and the two analyzed it late into the night. Martin had gotten Willis as a pup, trained him to be a show dog and spent nearly three years with him wowing judges at kennel club competitions throughout the country. But there was nothing regal about that dog on death row. Except the eyes. Martin would know those eyes anywhere.

Day and Martin frantically called the shelter, leaving messages for Howard, trying to get through before Willis was euthanized. Howard got the messages in plenty of time.

Willie had wandered at least 160 miles from his home and by this time had been missing for nearly 345 days. On December 2, Willie Wonka was reunited with his owners.

Martin, who now lives in Williamsburg, says she expects this Christmas to be as joyful as last year's was sad.

"I once heard Katie Couric refer to blessings as a 'God wink," Martin said. "That's how I feel, like God winked at me."

COMMENT: Anybody who knows about Clumber spaniels will agree that for a Clumber spaniel to live through such adventures is a lot more than good luck - it's a bloody miracle!

Thanks to Clumber (well, of course) for sending in this story.