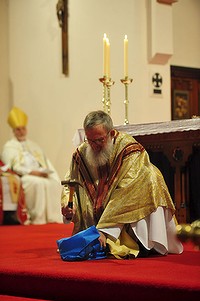 Anglican Bishop Michael Hough yesterday ended his controversial seven-year tenure, by smashing a ceramic pot, made for him by a local artist, with a hammer during his final cathedral service on Saturday

He told the packed cathedral the chalice was made for him when he took up the post, and was "a beautiful pot. But then along comes someone who hates the beauty of the pot, who resents the fact that it is slaking the thirst of the people in need of water. He does not want the pot there, as he has a pot of his own which he thinks is better … so the bitter man gathers a few others around him who support him in his dark intent, and they come and smash the pot to pieces."

Victims of the bishop's alleged bullying were aghast. "The bishop makes himself out to be a victim when he has been an enormous bully," said one, who did not want to be named. Another said: "It's like Genghis Khan complaining he's been wronged."

The bishop has a licence to work as a priest in Melbourne, and plans to continue in ministry. He said: "When they nail the lid on my coffin I'll still be preaching and teaching."

COMMENT: I have a feeling there will be plenty of volunteers ready and waiting with hammer and nails.