The following report puts the numbers involved in Benny's poaching into perspective.

From THE EARTH TIMES:

It has emerged that tens of thousands of Germans left the Roman catholic Church this year in the wake of serious allegations of clerical abuse.

In Augsburg, where Bishop Walter Mixa admitted earlier this year that he had hit children in his care, more than 11,000 left the Catholic church. More than 17,000 left the Diocese of Stuttgart, an increase of more than 50 per cent on the previous year. Other Catholic dioceses reported similar rises in numbers of people leaving the faith. In many instances, believers switched to the Protestant church.

In Germany, membership of Christian and Jewish religious denominations is formally documented and used as a basis for charging so-called church taxes to fund religious institutions. 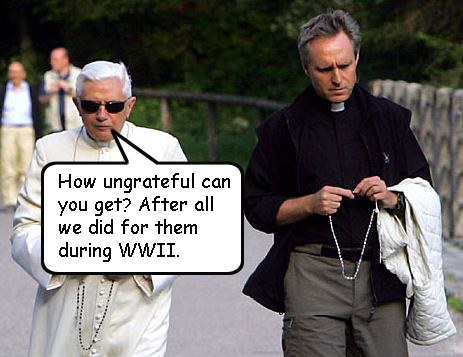