The tragedy reported below has been picked up by the world media. But is only the tip of the iceberg of suffering endured by the refugees of the world. There is only one way to rid the world of this terrible obscenity and that is to split the world's wealth up evenly between all its inhabitants. This will not happen any day soon and our failure to share that which God has given us will lead to a situation far worse than anything we have encountered so far or can even imagine. And it will not be just the refugees who will bear the brunt of the global unrest that our unjust economics, misuse of resources and global warming are going to cause. It will effect every one of us except, no doubt, the truly guilty.

Australia is launching a criminal investigation into the Christmas Island shipwreck that killed at least 28 people, yesterday. Prime Minister Julia Gillard said more bodies may be pulled from the sea after a boat carrying suspected asylum seekers crashed into jagged rocks. She said the boat may have been carrying more than the 70 passengers originally thought. Forty-two people were rescued from the heavy surf after the boat broke apart.

The passengers of the flimsy wooden boat are believed to have been asylum seekers making their way to Australia via Indonesia. 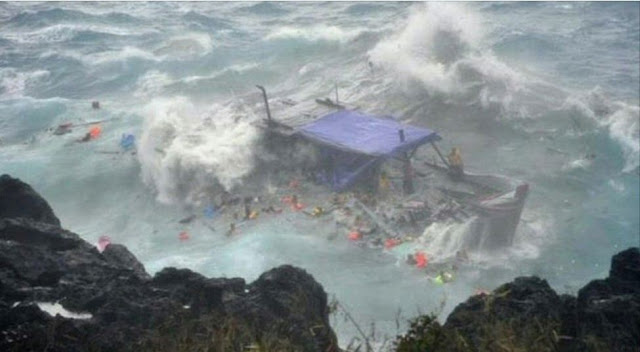 Fears for hundreds of refugees and asylum seekers being held captive in the Sinai Desert have intensified amid reports of the murder of two deacons.

Christian Solidarity Worldwide heard of the killings in a report from Italian human rights group Agenzia Habeshia. The two deacons were among 100 Eritrean refugees separated by their captors from a larger group which also included Sudanese, Somalis and Ethiopians refugees.

Agenzia Habeshia believes the deacons were singled out for punishment and killed on Saturday for alerting human rights groups about the plight of the remaining 250 refugees and asylum seekers, who have been held by the Bedouin traffickers for more than a month in the Sinai Desert.

CSW said conditions for the refugees were “degrading” and that traffickers were demanding up to $8,000 for each hostage’s release. They had already charged each refugee $2,000 for safe passage to Israel. According to Agenzia Habeshia, the refugees have had their religious possessions destroyed and suffered beatings and torture, including electric shocks.

Father Miroslaw Karczewski, a 45-year-old Conventual Franciscan, was killed Dec. 6 in the rectory of his parish in Santo Domingo de Los Colorados.

The dead priest was found by parishioners after he did not show up for evening Mass at St Anthony of Padua church, Fides reported. His body had wounds on various parts, which suggested that he attempted to struggle for his life, but he was killed by being struck with a large crucifix. The attacker took the mobile phone and computer from the rectory.

Police reported that Father Karczewski had already been assaulted in his home a year ago.

The priest belonged to the province of St. Maximilian Kolbe in Gdansk, Poland, and had been serving in Ecuador since 1995. 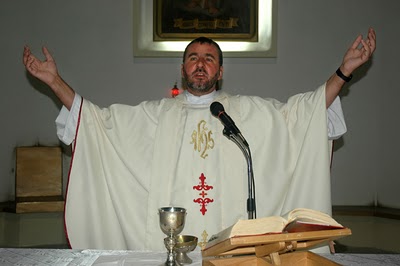 Please pray also for my friend Cathy, still struggling with lung cancer. I saw her this past Sunday, and while she doesn't look bad, her energy level is way down (and her mental attitude, similarly. She really needs a miracle.

Just a quick request Jonathan. I am having some unmentionable sort of surgery on Friday and would appreciate prayers. Thanks.

Posted by It's Margaret at
LEAVE IT WHERE JESUS FLANG IT:

Yesterday, talking to a friend who is a doctor, I said Joel and I laughed because I told him if he realized he was gonna die, he better make a run for it --none of this lingering around crap. He gave me precise instructions --that is also his wish... no machines pumping away to keep him alive....

My doctor friend said, well, you know, that is not what is gonna happen with this disease...

Beloved called last night, just as I got in --They were giving him a second IVIG treatment --intravenous gamagobulin... or however you spell that --massive dose that takes hours to drip in... scary stuff.

Yesterday was a great day. Aileen followed the doc with her eyes, blinked on command and moved her right arm up and then back down again upon being asked. Her blood labs looked good, and yesterday's CAT scan came back with good news. The hemorrhage on the left side is beginning to resolve itself and the pressure is going down. However, kidney and liver lab numbers are not so good today and she spiked a temp overnight. Please continue prayers. (Her husband, Mike)

Talked to Ma very very briefly over the phone today. She recognized me and asked how I was. I said, "fine and how are you!" She replied, "feeling strange," and then said something about the nurse coming in and hung up. I talked to my brother who said that now the doctors are not sure she even had a stroke. They now think the dizziness may have been caused by a drop in her blood pressure, which apparently is still low. They think the memory loss and disorientation may be more from the head injury. They don't know if she'll ever completely recover her short term memory and former mental function, but they do expect that she will recover about 90% of it. She is still in the hospital trying to build her strength back up for rehabilitation. Very confusing.

It's a hard time of year for dad. He can't get his head around why his family have "stuck him in a home" and won't have him to stay if we insist that he can't look after himself, which he obviously feels he can do quite perfectly if we'd only left him alone!

The staff at Frank Downie House are just wonderful and spoil him terribly, but visits are often difficult. There are often tears as he tries to struggle with why he's there and what he's "done wrong" to be dumped there. 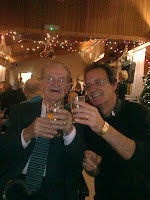 When I left him on Friday he was far from being in festive mood, and I was dreading tonight's Christmas Party which the RW and I decided to attend.

However, lo and behold, the old boy was done up in his good suit and shirt and tie, and with a plate of food in one hand and a good glass of whisky in the other, he was in good form!

Posted by Petty Witter at PEN AND PAPER:

Some of you may be aware that I haven't been too well over the last week or two or three and things came to a head on Friday when I saw our nurse for a routine injection. Not liking the sound of my breathing, she sent me in to see one of our GP's - a lovely German woman who is no-nonsense and very, very thorough. Having listened to my chest and done all my observations, she declared I had a(nother) chest infection and would need another course of steroids (my third) and another (not one) but two lots of antibiotics (my third lot) AND should really be going to hospital ..... and would be admitted if I wasn't able to skip into the surgery come Monday morning (on two crutches? Impossible anyway.) Needless to say, Monday came and I was no better despite trying to convince Husband dearest otherwise. The upshot, after being given a nebuliser (basically inhaled steroids) and oxygen, our GP sent for an ambulance which is where the nightmare began.

I skip forward to arrival in hospital where I was left in a corridor, they called it a waiting room - it wasn't - until I was taken through to triage to have my first examination which included having my blood pressure (BP) taken. Taken back to the corridor waiting room, we were once again left sitting until a nurse (lovely but so rushed off her feet she kept getting my name wrong) came to take some blood (I was lucky, I got taken into an actual real room, others had their blood taken whilst sitting in the corridor) and do a heart trace. More waiting until I get to see this arrogant little doctor who has yet to even fully qualify - he may well introduce himself and shake the hands of both Hd and myself but his tone and condescending look says it all - not another overweight patient.

"Do you work" he demands to know. "No" "Why not?" "Because I have a list of ongoing health problems and no one would employ me with that list no matter what my rights to work as a disabled person." I want to shout but can't because I'm too busy trying to breath and not doing a very good job of it.

"Any swelling of the ankles?" he then asks, grabbing hold of a leg which has obviously seen several surgeries. I scream, suffering from CRPS I cannot stand the slightest touch and his grabbing hold does not help. I feel an apology or, better still, some sign of understanding is warranted, he obviously doesn't.

I did get home that day. Obviously not too sick to be admitted to hospital but too poorly I felt to be left sitting in a corridor for almost five hours. The hospital's diagnosis? A viral infection. 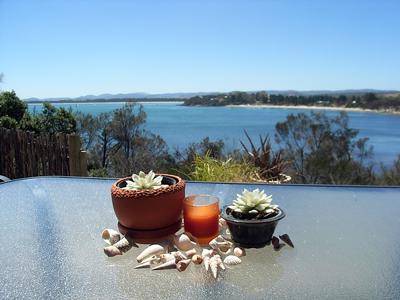