Our old friend, Clyde Beswick (the original "Opinionated Old Fart and one of OCICBW...'s first friends) has hit the news, big time.

For Clyde Beswick, the upcoming screening of a video art piece removed last week from an exhibition at the Smithsonian's National Portrait Gallery is a protest against censorship, but it's also a way to show that Downtown galleries are serious about art.

Beswick's CB1 Gallery will play “A Fire in My Belly" (1987), a 13-minute film by the late David Wojnarowicz that was, until last week, a part of the Smithsonian's “Hide / Seek: Difference and Desire in American Portraiture,” an exhibition on gay identity in art.
The short video was pulled after the Catholic League and members of Congress complained it was sacrilegious.
“I think it's important for all to know that censorship is wrong and that artists deserve to be heard and seen,” said Beswick last night, moments after confirming that he could secure the video art.
"A Fire in My Belly" will be screened through the entranceway window in CB1's West Gallery space during Downtown Art Walk and through the weekend.
And, my goodness, isn't Clyde looking well. 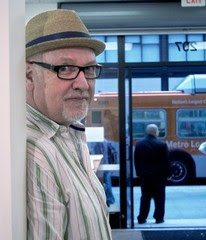