From "Pope tries to ban gay priests, again"
by Andrew Brown at THE GUARDIAN.

Hidden in Pope Benedict XVI's new book, Light of the World, is a story that is not about condoms, but will still be very important to the future of the Catholic church: he claims, on page 152, that even celibate homosexuals must be kept out of the priesthood.

"The Congregation for Education issued a decision a few years ago to the effect that homosexual candidates cannot become priests because their sexual orientation estranges them from the proper sense of paternity, from the intrinsic nature of priestly being. The selection of candidates to the priesthood must therefore be very careful.

"The greatest attention is needed here in order to prevent the intrusion of this kind of ambiguity and to head off a situation where the celibacy of priests would practically end up being identified with the tendency to homosexuality."

This is utterly unambiguous, and only about 100 years too late to be effective. What he is saying is that the priesthood must consist of men who have renounced the love of women, not those for whom it has never been a major temptation:

"Sexuality has an intrinsic meaning and direction, which is not homosexual. We could say, if we wanted to put it like this, that evolution has brought forth sexuality for the purpose of reproducing the species. The same thing is true from a theological point of view as well. The meaning and direction of sexuality is to bring about the union of man and woman

"And, in this way, to give humanity posterity, children, a future. This is the determination internal to the essence of sexuality. Everything else is against sexuality's intrinsic meaning and direction. This is a point we need to hold firm, even if it is not pleasing to our age ...

"Homosexuality is incompatible with the priestly vocation.

"Otherwise, celibacy itself would lose its meaning as a renunciation. It would be extremely dangerous if celibacy became a sort of pretext for bringing people into the priesthood who don't want to get married anyway."

COMMENT: But, of course, the vast majority of religious in the history of the Church have done just that. For much of the last two thousand years celibacy has been embraced by gay people, especially men, as a way of avoiding the problems of their sexual inclinations in cultures dangerously hostile to them and for women to avoid dying young in childbirth. This is not to say such people were any less committed to their vocations as anybody else - it is just a fact of church life. 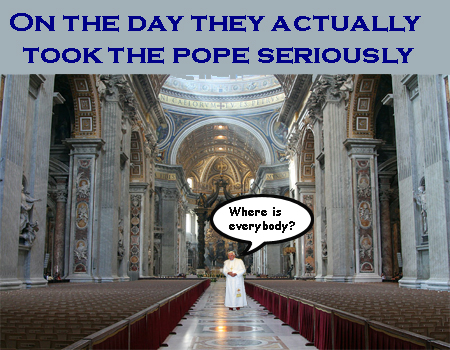 Thanks to Cathy for sending in the link.