The Council on American-Islamic Relations said it supports “common decency” and “mutual respect,” but CAIR spokesman Ibrahim Hooper stopped short of calling for the removal of an exhibit that features images of an ant-covered Jesus and “homoerotic art” currently at the Smithsonian Institution’s National Portrait Gallery

“We don’t want to be in a position of banning art or censoring art,” Hooper told CNSNews.com on Tuesday.

Christian activists have notched up an important victory in their attempt to cleanse the art world of what they see as offensive use of religious images by forcing the National Portrait Gallery in Washington to remove a video about Aids from an exhibition on sexuality in portraiture. The Catholic League, one of the most aggressive interventionist groups within the religious right, expressed its relief after the decision was announced last night to pull A Fire in My Belly, a four-minute video that forms part of the gallery's newly opened show, Hide/Seek. The league had objected to a sequence of 11 seconds within the video that depicts Jesus on the cross being eaten by large black ants.

Within hours of the league launching its attack through emails and media interviews, the gallery had bowed to the pressure and withdrawn the video.

The nature of the attack on the Smithsonian was particularly worrying for those concerned about censorship in the arts because at its heart was the threat of funding cuts against the institution. The Catholic League prompted John Boehner, the new leader of the Republicans in the House of Representatives, to threaten retribution through the national purse. 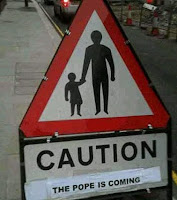 This is the picture which Hugh Dallas, Scottish Football Association's head of referee development, forwarded to his friends on the eve of Pope Benedict's visit to Scotland in September, and over which he has been forced to resign.

The Roman Catholic Church called it a 'tasteless message' and demanded that the SFA sack Mr Dallas. The Director of the Catholic Media Office, Peter Kearney, urged very swift retribution. He said the email was 'totally unprofessional, gratuitously insulting to the Pope, deeply offensive to the Catholic community of Scotland and an incitement to anti-Catholic sectarianism'.

From THE SCOTTISH SUN:

In the wake of the Hugh Dallas email row, Richard Dawkins has slammed the SFA's decision. He called on people to swamp the church's media office with similar emails after giving out their address and branding boss Peter Kearney "a nasty little weasel". And the professor also encouraged readers of his website to bombard SFA chief Stewart Regan with messages - branding him a "coward" who is "responsible for this craven giving-in to Catholic censorship."

The big question is, "Who defaced the road sign in the first place?"

In the light of THIS POST published by a certain blogger back in April of this year, I have a sneakin' suspicion that it was one of OCICBW...'s gentlemen Scottish readers. But as they are all very naughty boys I cannot hazard a guess as to which one was actually responsible.

Steady rain Tuesday did not stop people from attending a candlelight vigil in support of an Islamic center targeted by an apparent hate crime after a teen who occasionally worshiped there was accused of planning mass killings in Portland. Hundreds of residents of this small college town came out for the vigil at the Salman Alfarisi Islamic Center.

Elizabeth Oettinger, senior minister of the First Congregational Church United Church of Christ, said a number of religious leaders organized the event to show support for the Muslim community after the center's office was set on fire Sunday.

Rabbi Benjamin Barnett noted the vigil outside the mosque came one day before the start of the Jewish celebration of Hanukkah, the festival of lights.

"Truly this is a festival of lights right now," he said. "The Muslim community — Muslim brothers and sisters standing here now outside your holy place — have been dealt a blow of darkness. The question is, what's the light in response? And I think I'm looking at it right now." 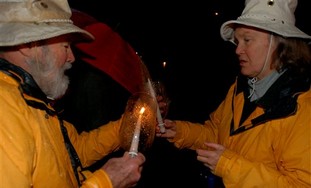 And finally, because the Italian Church
is the original curate's egg: