I think this proves my point about the evils of belonging
to FaceBook.

Stick with the Bloggers! We will never lead you astray. 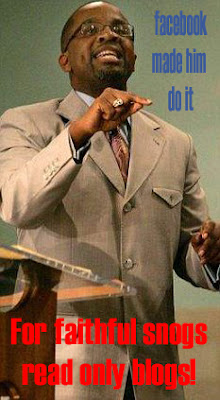 The 48-year-old leader of the Living Word Christian Fellowship Church in Neptune, New Jersey, confirmed the sex games he played with his wife Kim after his testimony in a court case was revealed.
The liaisons often took place at his home during Thursday Bible study meetings and Sundays after church.

Thanks to Cathy for sending me this story.