The Church of England has come one step closer to formally adopting a major new mechanism aimed at holding the Anglican Communion together. All three houses in the General Synod, its parliamentary body, voted overwhelmingly today to send the draft Anglican Communion Covenant out to diocesan synods for further consideration.

The chamber at Church House in London was full for the lengthy debate, which saw a number of Synod members express their reservations about the Covenant. In his last speech to Synod, the Bishop of Lincoln, the Rt Rev John Saxbee, said the Covenant represented “factory farmed religion rather than free range faith”.

“I entirely support the process – so long as it doesn’t end,” he quipped.

He said a Covenant would only lead to a two-tier Communion and second-class Anglicans.

His comments reflect the concerns of opponents and even supporters of the Covenant who fear it would stymy diversity and centralise the Communion in such a way as to make it too authoritarian and overly focused on discipline.

Although the Bishop of Gloucester, the Rt Rev Michael Perham, said he would vote in support of the Covenant, he admitted that he did so with some reluctance because of his concern that the Covenant could be used to take “punitive action” against some Anglicans who hold a different position.

Speaking in support of the Covenant was the Bishop of Bristol, the Rt Rev Michael Hill, who proposed the motion asking Synod to send it out to diocesan synods for consideration.

He denied that the Covenant was “un-Anglican”, as some opponents have suggested, and told Synod that it offered a framework for ongoing conversations “so that hopefully we can engage with each other as adults”.

The bishop warned that delaying the Covenant process any further would be a “serious blow to the whole process and to the Archbishop of Canterbury’s efforts to keep dialogue going across the fault lines within the Communion”.

The draft Covenant needs to receive the consent of the majority of diocesan synods in order to return to General Synod for final approval. If this happens, the Covenant is likely to be adopted some time in 2012.

COMMENT: Despite my Google grabbing headline, this vote does not mean that the majority of the members of General Synod approve of the Covenant. They are merely putting off the decision so that they don't upset that nice, old man with a beard. The real fight, as I have suggested elsewhere, will be in the dioceses and, in particular, in the deaneries, where Gospel based Christians can bring the full facts concerning the abrogation of our national sovereignty to the attention of our laity. I am still convinced that if the laity can be bothered to take notice of this gay bashing legislation they will not like it because, if there is one thing the English laity hate, it's being told what to do (especially by foreigners).

Furthermore, the vote today was based on a simple majority. Some inclusive bloggers have complained about this but, to be honest, as this was only a motion to pass the matter on to the dioceses for discussion, it was never going to be anything else. Between now and 2012, the anti-covenanters must work hard to persuade Synod that the decision to adopt  the new legislation is on a par with the decision to ordain woman as priests and should, therefore, require a two thirds majority in all three houses to be passed. They must also work on the government. I don't think we have done enough to alert Parliament to the constitutional havoc that will be reeked by the adoption of this damnable thing. The Church of England is established and is the only body apart from our Government that can pass legislation which effects all English citizens. Such a constitutional body within England accepting a status that allows foreign powers to dictate English policy would be like Yorkshire unilaterally deciding that it is only going to abide by legislation from Westminster if the Chinese government says they should do so.

Thirdly, the decision by General Synod to continue to make the lives of gay people throughout the world a living hell will mean that all future proposals for the allowance of female bishops will go through on the nod. The liberals on Synod who were happy today to become Biblical fundamentalists for the sake of their leader's pride will we be scared stiff of being labelled a bunch of lilly-livered bigots and will try and deflect this accusation by going all out for female equality in the Church. The Grand Tufti himself, will continue to avoid owning the evil he has set in motion by giving this his full backing as well. It's not like he is gay whilst, on the other hand, he has to live with a woman.

Finally, the delay gives Gospel based Anglicans in England time to decide what we will be forced to do, to distance ourselves from such a false description of our own beliefs, should such an evil document become part of the faith we adhere to. A TEC Personal Ordinariate springs to mind and that is going to take a couple of years to set up. Remember, Bishop Gene will have a lot of time on his hands then and will most likely be bored of retirement. He will probably be looking for a new project to get his teeth into. 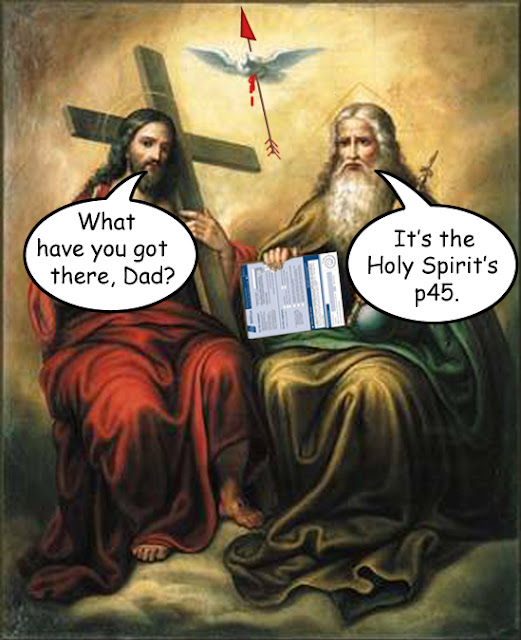