The UN has removed a reference to sexual orientation from a resolution condemning arbitrary and unjustified executions. The UN General Assembly resolution, which is renewed every two years, contained a reference opposing the execution of LBGT people in its 2008 version. But this year's version passed without any reference to gay rights after a group of mostly African and Asian countries, led by Mali and Morocco, voted to remove it.

The resolution "gives a de facto green light to the on-going murder of LGBT people by homophobic regimes, death squads and vigilantes," said Peter Tatchell, a British LGBT activist. "They will take comfort from the fact that the UN does not endorse the protection of LGBT people against hate-motivated violence and murder."

He added: "The UN vote is in direct defiance of the Universal Declaration of Human Rights, which guarantees equal treatment, non-discrimination and the right to life. What is the point of the UN if it refuses to uphold its own humanitarian values and declarations?"

The US abstained from the final vote to approve the resolution. 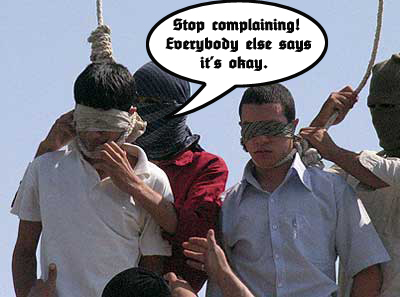 Thank you to Our Trace for sending in this story.