After a special service at Westminster Abbey, the Queen is to open the Church of England's general synod.

The synod - the Church's legislative body - is the only institution outside Parliament that can make laws, even if it does have to get its decisions approved by a special parliamentary committee. One of the most important laws likely to emerge in the synod's five-year term starting on Tuesday is the introduction of women bishops. It has already been a debate that has deeply divided traditionalists from progressives, and led some on the Catholic wing of the Church to say they will take up the Pope's offer of a place in the Roman Catholic Church.

To many outside the Church - and to some Anglicans as well - so much anguish and dispute over what they regard as a logical progression from the ordination of women priests 16 years ago is unaccountable. But for traditionalists - from both Anglo-Catholic and Protestant backgrounds - there is something fundamental at stake. Some see it as part of a struggle for the soul of the Church, suggesting that the future starting with this new synod will bring in a more liberal Anglicanism which has less time for traditionalist values. They point to the growing "feminisation" of the Church as a cause for concern.

The Reverend Peter Sanlon is the curate of St Ann's in Tottenham, an evangelical church in north London. He understands the Bible as supporting "male headship", a natural role for men as leaders of their own households and the Church alike. He says he would be reluctant to serve under a woman bishop, but his real concern is that the growing influence of women clergy will result in the ordination of openly gay bishops.

"While it's not true of every woman, in general more women are supportive of permitting homosexuality," he says.

"So in general statistical terms, the more women who are promoted to positions of leadership like that, the greater problem there will be in holding the line and defending the traditional views of morality in that area as well." 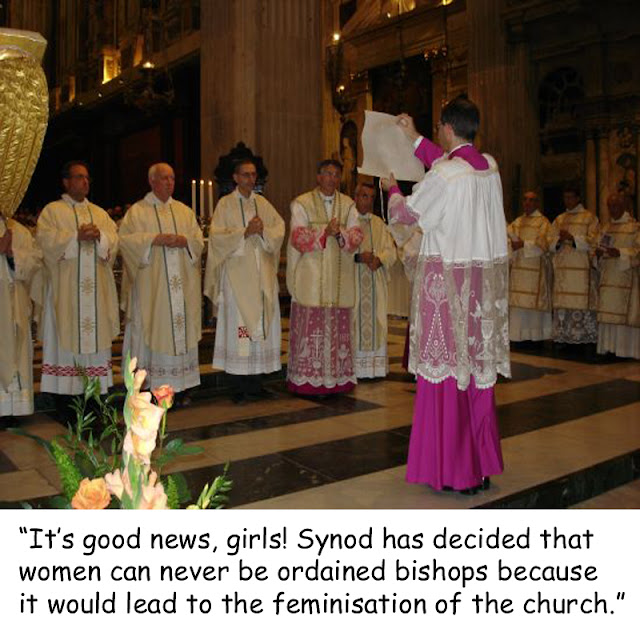