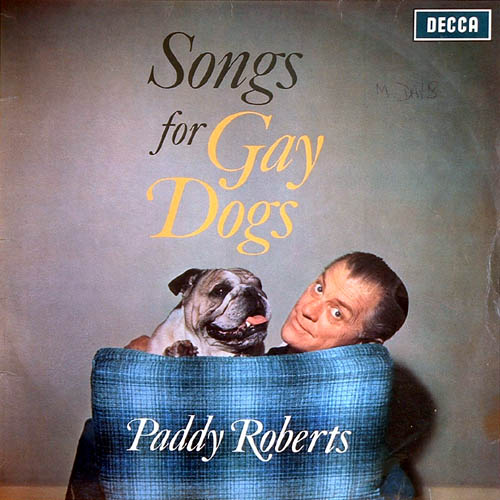 Do not for a moment think that this is an example of 1963 naivety. Paddy Roberts knew exactly what the word "gay" meant, even back then.

I don't have this album but I do have a "Best Of" CD, from which the following sleeve notes are taken:

Paddy Roberts is a large man with a quiet voice and a gentle manner that belie his ironic but dangerously sharp sense of humour. In his time he’s been a divorce lawyer, a club pianist, an airline pilot and a ’song plugger’, but we all know him now as the singer, in a voice with an appealing tendency to go off-key, or some of the wittiest and wickedest songs ever to entrench themselves in the hit parade.

Born in a remote part of South Africa in the year the King Edwared VII died, Paddy was sent to England for his schooling, but returned to South Africa where after graduating he took up a law practice, “making a speciality of undefended divoce cases”. But he had started to write songs at university, and when the opportunity arose he worked his passage on a sailing ketch to Britain, where he landed with 30/- in his pocket. Taking on odd jobs to keep himself, he began his assault on the British song industry. He was first heard on the BBC in a series called ‘Songs You Might Never Have Heard’. As a member of a vocal group featured on the show, the ‘Tin Pan Alley Trio’, he was beginning to make finacial progress when war broke out.

During the war, Paddy flew with the R.A.F. across the Atlantic. to Russia, in the Western Desert and with Coastal Command, and when peace came he became a transatlantic pilot for B.O.A.C. But in 1950 he returned to song writing, and reached the number on spot in 1954 with ‘Softly, Softly’, which was recorded by Ruby Murray. Then he made the first of the records featuring his own singing of his more saucy songs which were to keep him at the top of the charts for months on end, and he rapidly became a top cabaret star. Since then he has been very busy with appearances throughout Britain, and he has been back to sing in South Africa, but he has also found time to work as vice-chairman of the Performing Rights Society and Chairman of the Song Writer’s Guild.

Here on a newly-recorded L.P., Paddy Roberts sings again the songs, spicy, sophisticated, some the slightest shade of blue, which have made his name a byword for wit and entertainment.

Here are three tracks by this great wordsmith and songwriter. The first is the sad tale of a gay cowboy that predates "Brokeback Mountain" by nearly half a century; the second is an ironic thank you to Christopher Columbus ("Get our teenagers plastered, and leave them a little bastard, a souvenir of Uncle Sam"); and the third is one of the three greatest Christmas songs of all time (the other two being by Greg Lake and Frank Kelly).

The man was a genius. You are so going to enjoy these tunes, as will any gay dogs you happen to live with.