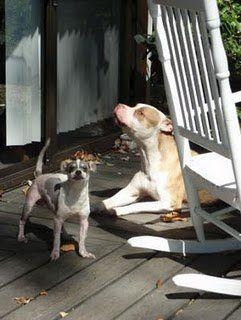 Sometimes even an abandoned, injured dog with a bad rap ends up doing great things. And so it was with a female pit bull, being guarded by her beloved boyfriend, a Chihuahua. What the Pennsylvania dog warden did not realize when he rescued the pair on Labor Day, was just what a sweet story these two dogs had to tell. Once the pit bull got into a crate on the warden's truck, the Chihuahua would not follow. Instead, he put himself between the two, barking and growling at the warden.

"So I sat on the ground ... all the time having a conversation with a Chihuahua that was guarding a Pit Bull!," the warden writes in a story about this odd couple.

"Eventually he let me get close enough so we could have a face to face & heart to heart discussion. I told him that his intentions were very noble and would not go unrewarded for the both of them."

The warden would not follow his usual routine when finding a pit bull — to take the dog to a facility that could euthanize her within 48 hours. "Due to this little guy's tenacity and I do believe true affection for his Pit Bull lady," the warden writes, "I was not going to let that happen."

The warden found them safe haven at the no-kill Washington Area Humane Society. He asked the staff, could they please find room in their already overflowing no-kill shelter for just two more dogs?

"We truly didn't have room but we could not let them go," says Alice Wancowicz, assistant manager of the shelter in Eighty Four, PA.

And so, the staff embraced the pair, naming them Bonnie and Clyde.

So it comes as a surprise that they have not been adopted. "They would fit in anywhere," says Wancowicz. "They don't have issues with adults or kids."

The dog warden writes that we need to change our opinions of pit bulls: "You may find a loving, loyal and dedicated companion to fight for like our Chihuahua friend did."

COMMENT: You can read more of this story at TONIC, and they also have details of the shelter that is looking for a home for these two characters. Well, you never know, one of you may be in a position to come up trumps for them - they're a couple of outsiders and that's something the OCICBW... crowd can truly empathise with.