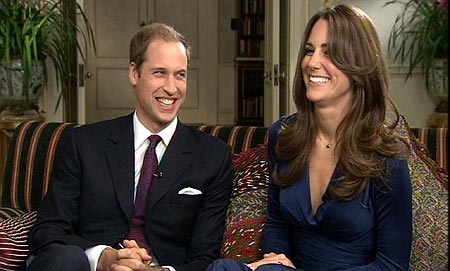 I just love Prince William's wicked, "I know I'm going to get what I want tonight" grin. And, boy! He certainly knows exactly how to perform in an interview. He was completely in control throughout, taking care of both himself and his missus.

I am, as you know, a royalist. But I'm a pragmatic one and, although I respect Prince Charles' attempts to make the world a better place, I have to admit that he has the diplomatic and self presentation skills of his father rather than his mother; in other words, none whatsoever. Perhaps the lowest point in his generally miserable public career was his interview alongside Diana when they got engaged. The "what is love" gaffe certainly warned us all of what was ahead. William, on the other hand, is either very much in love or an incredibly good actor and, to be honest, the British public won't give a damn which is true. With royalty, the play is the thing, and last night's performance by William and Kate, bodes very well for a record breaking run, at least by today's standards of fidelity and public service.

Now, you republicans, keep your thoughts to yourself on this one and, at least, try to pretend that you are excited. If we all pull together as a nation we might just get a public holiday out of the wedding. I remember Charles and Diana's wedding day - the pubs were open all day and the party spilled out onto the streets. Don't let your vehemently held beliefs get in the way of a good time!

Although the embedding function has been switched off the full interview can still be viewed at YOUTUBE.