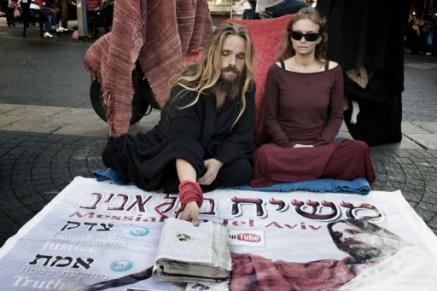 Tel Aviv has long prided itself on being a secular, cosmopolitan outpost in a land overflowing with religions, saints and shrines -- but now it has its very own "messiah". Sitting cross-legged on the ground in a gritty part of town by a bustling open-air market, he exudes the air of a Biblical character, down to his long hair, beard and sandals.

"One year and two months ago I was an ordinary person and then a snake bit me in Bethlehem. And then I started to see God," he told AFP, describing how he died and was "resurrected" as the messiah.

Calling himself only "The Messiah of Tel Aviv", this 31-year-old Russian-born immigrant has become a fixture in a neighbourhood more accustomed to beggars and bohemians before he announced he was a prophet, bringing dark warnings of the approaching apocalypse.

But he has not been warmly welcomed.

"They hate me, bite me, spit on me, try to kill me," he says of passers-by, whose jibes and jabs he endures on a daily basis.

"This is the kind of thing you have to be ready for if you are messiah."

Tel Aviv's "chosen one" claims variously to be Jesus or Moses and his philosophy seems to borrow heavily from texts associated with the Jewish mystical discipline of Kabbalah, which incorporates elements of gnosticism.

His mission, he says, is to teach people to give more, take less and let go of their ego -- all before the apocalypse comes in 2012.

Although the Messiah of Tel Aviv has not yet attracted the masses, he does have his fans. Sitting next to him is a thin blond in dark glasses. She is his third "wife" in less than a year, he says.

The first disappeared after she was hustled away from the market in a car by her parents. She has since started a Facebook page claiming the "messiah" abused his female followers. The second, a Moldovan, who was deported for overstaying her visa, appears to still be a believer.

"The time will come, and it is already near, when it will be too late for you to believe that he is the true Christ, our saviour," she warned in an email.