This is the American Humanist Association's Christmas campaign this year:

The American Humanist Association’s Consider Humanism campaign, the largest nontheist advertising campaign in history, is a series of advertisements that feature two “sections”—one devoted to quotes from religious texts, the other to humanist principles.

There are millions of Americans of strong moral character (There are? Where are they hiding then?) who don’t happen to believe in a god. Humanists have always understood that you don't need a god to be a good person, but many other Americans have not, and that’s one reason we’ve been running ad campaigns in the past. This year, we’re going further in our attempt to challenge the intolerant view that atheist and agnostic humanists can’t be good without Bible derived morality. We’re taking a hard look at what is included in religious texts.

The first section of each ad displays one of several quotes from the New International Version Bible and a Qur’anic quote as well. A description accompanies each quote, naming the source of the quote. This section includes large-font text that reads, “What some believe.” The second section features contrasting quotes from humanist documents. These have been pulled from Humanism and Its Aspirations and from nontheist luminaries such as Katharine Hepburn and Richard Dawkins. This section includes large-font text that reads, “What humanists think” and “Consider Humanism.”

The ads will be featured in major newspapers such as USA Today, the San Francisco Chronicle, the Seattle Times, the Atlanta Journal Constitution, the Village Voice, the Durham Herald Sun, the Arizona Republic and the Independent Triangle, and magazines such as the Progressive and Reason. The ads will also appear on buses and phone booths across Chicago, Los Angeles and San Francisco, inside the Washington DC metro and bus system, on billboards in Moscow, Idaho and Philadelphia, PA, as well websites such as the Friendly Atheist. Consider Humanism TV commercials will appear nationwide on NBC’s Dateline, and stations such as MSNBC, CNBC and Bloomberg Business Television.

The campaign is costing them $200000. Money that could be better spent on feeding the starving victims of faithless capitalism if you ask me.

Until these bitter people start proclaiming the good news of their non-religion that they cling to so religiously and stop shouting about the bad news of the world's faiths, they are only going to encourage more people into religion. You won't get anywhere advertising Apple Macs with photos of spotty geeks using them.  For the same reasons you are not going to sell atheism to our godless and consuming generation if all your spokesmen (yes, men) are obviously boring nobodies with huge chips on their shoulders who have never been laid. 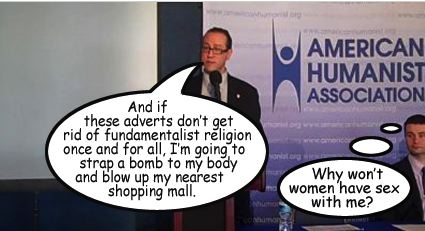