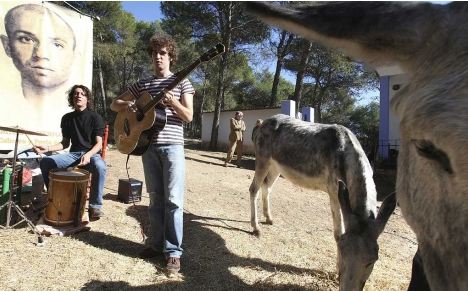 A goat and 48 donkeys made up the audience on Saturday to a performance of popular Spanish songs by the group Anda Jaleo, with United States singer, Josephine Foster, at the Association for the Defence of the Donkey, ADEBO, in Rute in Córdoba.

The music came from the ‘Canciones Populares Españolas’ by Federico García Lorca, compiled in 1930, and the Lorca Foundation is one of the supporters of the donkey association. The concert was to draw attention to the work of the association which is trying to remove the image of clumsiness and brutality traditionally put against the donkey.

President of ADEBO, Pascual Rovira, said it has been shown that donkeys are ‘the most intelligent of animal species’. He said they often play the animals taped music, and have noted that they are not that found of Flamenco, preferring gentler tunes.

COMMENT: Okay, I'm a bit out on the species, but the sentiments are so spot on that I just have to play it: