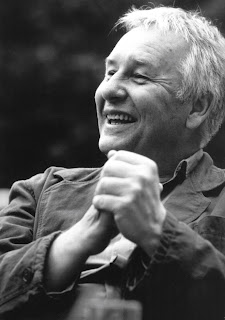 I believe in the sun
even when it is not shining.

I believe in love﻿
even feeling it not.

I believe in God
even when he is silent.

There were three recordings that dominated the classical music scene in England during the 1990s. They were Steven Isserlis' recording of Taverner's "Protecting Veil," The Hilliard Ensemble's album, "Officium" with Jan Garbarek and, above all, Dawn Upshaw singing on a recording of Górecki's Third Symphony.

The commercial classical radio station, Classic FM, started broadcasting in September 1992. Its daytime programming was deliberately restricted to short pieces and single movements presented by personable deejays, many of whom had worked on pop stations previously. The station was looked down on, venomously, by classical purists. In composers such as Górecki, Taverner, Gavin Bryars and Pärt, Classic FM saw the opportunity to schedule modern art music without having to play unlistenable dross. This decision paid huge dividends for the station and propelled these contemporary ambient composers into the consciousness of the British public. And I say, well done, Classic FM. They single handedly rebooted the dying classical music scene in my country and made it possible for anybody, whatever their education and social class, to attend classical performances without feeling like lepers. They also brought a lot more money into the classical music industry, no doubt making the lives of many of the snobs, who had originally shown nothing but disdain towards the station, a lot more financially secure.

Most of Górecki's compositions are pleasant to listen to. He may or may not go down in history as one of the great composers of all time. But, I have a feeling that "The Symphony Of Sad Songs" will always be a part of the classical repertoire. I hope so as it is a reminder of both the disgusting acts of violence against innocence that humans are capable of and the miraculous acts of faith humans are capable of, even when God appears to have given up on us and left the universe to its own evil devices. (MadPriest)

Here is a recording of his choral work, "Totus Tuus" performed by The Robert Shaw Festival Singers and Chamber Singers:

And here is a YouTube video of the
second movement of his third symphony: