From THE NORTHERN ECHO: 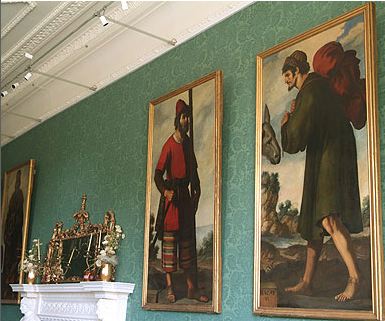 The Church of England has been secretly planning to sell the historic Zurbaran paintings, one of the region’s best-loved treasures. Officials had arranged for the 12 paintings that hang in Auckland Castle, County Durham, to be auctioned at Sotheby’s next month, for at least £15m.

Documents passed to The Northern Echo – stamped strictly confidential – reveal that church bosses paid up to £35,000 to one of London’s leading public relations companies to prepare the sale. Confirming a final decision was taken, the first page reads: “The 12 Zurbarans hanging in Auckland Castle are to be sold.” Yet, at the same time, Church Commissioners cancelled a meeting with a Labour MP concerned about the future of the larger-than-life paintings and insisted the issue was simply “due to be reviewed”. When contacted by The Northern Echo, the Church first denied the sale was being prepared, only admitting the fact when told the leaked documents were in the newspaper’s possession.

A spokesman then insisted the decision had been “reversed”, on October 19 – the day the paintings were due to be removed from the castle, under the original timetable. Apparently admitting the sale was merely on hold, the spokesman said: “We were not able to tell the local authority, or anyone in the local area, before the paintings hit the sale catalogue.”

It appears the Church saw an opportunity to exploit the fact that Auckland Castle is empty, following the retirement of the Right Reverend Tom Wright, in August.

The Rt Rev Wright condemned the sale, saying: “This is news to me. Nobody told me the decision was going to be taken this summer. I put heart and soul into the battle to save the paintings five years ago and regard it as entirely wrong to sell them. There is a massive feeling in the North-East that, yet again, people sitting around in London are making decisions that affect their cultural heritage.”

Helen Goodman, the Bishop Auckland MP who was given the documents, condemned the Church’s behaviour, saying: “It is simply wrong to sell the paintings. They belong in Auckland Castle. People in Bishop Auckland are immensely proud of this part of their heritage and go to the castle regularly to look at the paintings, which are very important to them. The Church would never sell historic treasures in St Paul’s Cathedral, but are happy for the Zurbaran paintings to be taken out of the North of England.”

Lawyers acting for the Church Commissioners contacted The Northern Echo in an attempt to halt publication of the story. A lawyer for Mishcon de Reya said the documents were confidential and asked for an undertaking the paper would not publish details of the plan. No such undertaking was given.

COMMENT: Personally, my mind is split on whether or not the paintings should be sold. I love art and local culture and, as someone living in the North of England, I understand how painful it is to be robbed of local heritage by the affluent south (Give us back our Gospels!). However, I have also read the New Testament and understand our Lord's commandment to let go of earthly possessions (although I doubt the money from this sale will go to poor).

But this article is not about the rights and wrongs of selling these works of art (a decision that should be made by the whole community involved not a few unelected officials hiding behind their office doors). This article is about the arrogance and corrupt, worldly mindset of those who make the big decisions in the Church of England. That this deal was done in secret demonstrates the contempt they have for the rest of us and their patronising, "We know what's best for you," attitude towards the rest of us and the people of England in general. Unfortunately, as the Curia manipulates more and more power and authority unto itself the more this sort of shenanigans will become commonplace.

The Afternoon Cuppa Party of the Church of England say, "Give us back our church!!!"

The thirteen Zurbarán Paintings hang in the Long Dining Room of Auckland Castle, each painting standing eight feet tall. They are the work of a contemporary of Valázques and El Greco, Spanish artist, Francisco de Zurburán. Painted between 1640 and 1645, they are of patriarchs, Jacob and his twelve sons. The twelfth son, ‘Benjamin', is not in fact the work of de Zurburán, but of Arthur Pond, an artist, copyist and art critic of the 18th century. It was Bishop Trevor who in 1756 acquired this now priceless collection for £124, after a history which probably took them to South America before coming to England.
Find out more about the artist Francisco de Zurbarán