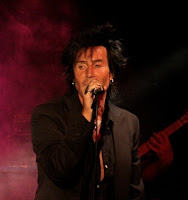 
James Freud was born as Colin Joseph McGlinchey on 29 June 1959 to Joe and Hannah McGlinchey and grew up in Melbourne. His interest in music began before he started school. "From the time I was five, I realised that was what I wanted to do. My uncle gave me all the Frankie Avalon records and I just loved them. That was it, that was all I wanted to do".

Freud formed his first band, Sabre, at the age of 16, with high school friend and guitarist Sean Kelly and drummer Ian McFarlane. Their first performance was at his younger sister's slumber party. After hearing the Sex Pistols' song "God Save the Queen" in 1977, Freud formed The Spred with Kelly, and three other members. Formed late in 1977, Teenage Radio Stars was a glam-punk band with Freud on lead vocals and guitar and Kelly on guitar and vocals. By early 1979 he formed James Freud & the Radio Stars. They signed with Mushroom Records and their debut single, "Modern Girl," was released in May 1980, which peaked at No. 12 on the Australian Kent Music Report Singles Chart. In 1982, Freud joined Models as bass guitarist and shared lead vocalist duties on some songs,. In 1985, Two Freud-penned hits, "Barbados" and "Out of Mind, Out of Sight", took Models to No. 2 and No. 1 on the Australian singles chart, respectively. He remained in the band until they split in 1988. In 1989, Freud went solo.

Freud published his first autobiography in 2002, I Am the Voice Left from Drinking where he detailed his alcoholism and described how he nearly died on 24 March 2001 from alcohol poisoning and massive blood loss, "I was standing upon the wreckage of my youth; I probably wouldn't make it through the night and as I lay there, I couldn't help but wonder, 'How did I end up like this?'".

On 4 November 2010, Freud was found dead at his home in Hawthorn, Melbourne. A week earlier, on 27 October, Models were inducted into the ARIA Hall of Fame without Freud attending the ceremony. His absence was explained publicly as due to commitments to managing his sons' band. Privately, organisers were told that Freud would not attend because he could not be anywhere near alcohol. Unfortunately, James has succumbed to his disease and took his own life on the morning of 4th. November 2010. (WIKIPEDIA)

Here are a couple of songs by James - his hit, "Out Of Mind, Out Of Sight," and a track entitled "Wreckage Of My Youth"  off his last album which was released in 2008. Underneath is a video of James with Teenage Radio Stars singing their most famous song, "I Wanna Be You Baby."