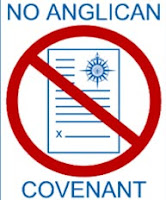 The campaign against the Anglican Covenant was stepped up a gear on Nov. 3 with the formation of an international coalition that says the covenant would constitute "unwarranted interference in the internal life of the member churches of the Anglican Communion, would narrow the acceptable range of belief and practice within Anglicanism, and would prevent further development of Anglican thought."

The coalition -- made up of Anglicans in Canada, England, New Zealand and the United States -- has launched a website, called NO ANGLICAN COVENANT that it says provides resources "for Anglicans around the world to learn about the potential risks of the proposed Anglican Covenant."

"We believe that the majority of the clergy and laity in the Anglican Communion would not wish to endorse this document," said the REV LESLEY FELLOWS, the coalition's moderator and a member of the Church of England. "Apart from church insiders, very few people are aware of the covenant. We want to encourage a wider discussion and to highlight the problems the covenant will cause."

COMMENT: The quality newspapers and media websites in England have picked up on the new impetus against the Covenant. At long last! This should raise the issue in the awareness of the members of General Synod and the Church of England in general.

I predict that the General Synod at the end of this month will vote for the Covenant to be passed "down" to the individual dioceses for discussion. It is there that the "No Covenant" campaign on my side of the pond will win the day or fail miserably, depending on the organisational skills of the leaders of the campaign (with the exception of Lesley - all the usual suspects). Being, company types, there's a lot of insistence on no dirty tricks and negative campaigning. I say "bollocks!" Persuade the laity that England will be giving up her sovereignty to a bunch of foreigners who will then tell them what to think and, no matter how much the House of Clergy love their Grand Tufti or how much the House of Bishops stick together like ecclesiastical frog spawn, the chances of the covenant being approved by all three houses in 2012 will be zilch.