Interestingly, once I started really caring for the dogs, the dogs began returning the favour. There was a day I went out for a bike ride and came back with a broken finger, a few bruised ribs and an absolute terror the dogs would jump on me when I got home. But they knew, and they knew immediately. No one jumped, no one barked. Instead, the entire pack calmly escorted me to the couch, where they took careful turns licking the side of my face and resting their heads on my shoulder. Turns out that the other side of detachment was the very intimacy I had come looking to find.

Once I realised this – realised that detachment was not only impossible, but also detrimental – I started making progress. I became a better dog rescuer, more patient, more empathetic. Empathy was the real doorway into wonder. Once I started feeling for the dogs, I also started really noticing their behaviour. It was something to see.

During our second year, behaviours began to show up in our pack that do not show up in the scientific literature. I won't go into much detail – you probably won't believe me anyhow – but I will say that very few researchers have studied large packs of dogs living together with humans (despite the fact that this was how our species co-evolved).

In the end, though, it's the dog's recoveries that have become my great joy. When dogs arrive in our care their state of affairs is often severe shell-shock. It usually takes them a few weeks to sleep it off, a few more to integrate into the pack. Afterwards, when they start feeling vaguely normal again, there's a point when the new arrival realises this is not actually a hallucination: they really do get to romp through our fields and sleep on the couch and these humans keep on feeding them. Their eyes get big and they run wild laps around the yard and dance and bark and sing and literally fall in love with life again or – as is the case with many of the dogs in our care – they fall in love with life for the very first time. Let's just say this too, it's something to see.

COMMENT: You simply have to read the rest of this article posted at THE GUARDIAN. It is quite long but, I promise you, it will add a thousand times as much time to your life as the time you spend reading it, just because of the joy it will bring you.

Thanks to the original Soppy Sheila
for sending in the link to this story. 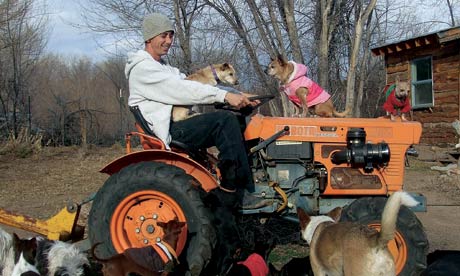