From THE VANCOUVER SUN:

Controversial remarks over the last few days by Archbishop Andre-Joseph Leonard, a conservative close to Pope Benedict XVI, have hit specially hard in a country reeling from a major church child abuse scandal.

The latest sign of growing unease within the church was a sudden announcement Tuesday by Leonard's spokesman Juergen Mettepenningen he was quitting the job only three months after joining the archbishop's office.

"An accumulation of different reasons and a lack of trust mean that I neither wish nor want to continue working as Monsignor Leonard's spokesman," he said in a statement, followed by a news conference later in the day. 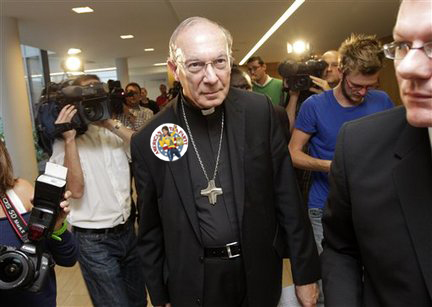