From THE HERALD SUN:

Many children with Down Syndrome are being eliminated because of abortion, a spokesman for the Roman Catholic Church in Madrid said ahead of a weekend visit by Pope Benedict XVI.

The Pope will bless the first stone for construction of a new home for children with Down Syndrome and other disabilities in Barcelona on Monday. It is being built by the Roman Catholic Church's Nino Dios foundation, which used to work only with Down's Syndrome children but has since broadened its work.

"We know that the number of these people has declined mostly because a good number of them are eliminated before they are born," said the press director for the Spanish Bishops' Conference, Isidro Catela.

The Pope, "will extend his hand to the defence of life, the life of everybody, whether or not they have greater or less intellectual capacity," Mr Catela said. 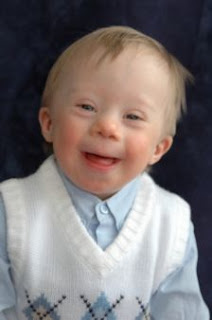 COMMENT: To be honest the possibility of a baby being born with disabilities, my unsureness about abortion and the likelihood of being a crap parent to such a child is one of the reasons I do not have children. Perhaps such selfishness such exclude me from this debate but I would say one thing. Before trying to persuade parents to proceed with the birth of babies they know will be severely disabled, the Pope should try to persuade governments, and selfish "tea party" sorts, that much more money from public coffers (from higher taxes) should be made available to make the lives of parents with disabled children a beautiful experience rather than being full of hardship and poverty.