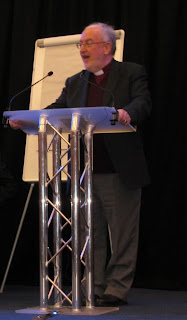 A Church of England bishop caused outrage last night by linking those who support the ordination of women bishops to the Nazis. The Right Rev Wallace Benn, Bishop of Lewes, said church traditionalists were in a similar situation to those who faced the Nazis in January 1939.

The conservative bishop told a conference: ‘I’m about to use an analogy and I use it quite deliberately and carefully. And it slightly frightens me to use it but I do think it’s where we’re at. I feel very much increasingly that we’re in January of 1939. We need to be aware that there is real serious warfare just round the corner. It’s actually arrived in some places already. And we’re in a challenging and serious situation.’

Last night the bishop was condemned by charities and those who support the ordination of women bishops. Christina Rees, of Women and the Church, which lobbies in support of the ordination of women bishops, said: ‘The more I read what Wallace Benn said the more I am outraged by his analogy and comments. That Bishop Wallace Benn can describe his position as “Churchillian” with the clear implication that, as Hitler was the problem then, so women bishops are the problem now, is mind-boggling.’

COMMENT: I have no problem with Bishop Benn implying that those who support women bishops are Nazis - I have accused his lot of being a bunch of fascists on many occasions. I have no problem with him likening the situation in the Church of England to the start of a major war - because he is right in that respect and he is right to state that many of those who hold the same views as himself will eventually not be able to remain in the Church of England. They will have to make the choice between pragmatism and idealism and those with integrity will leave. But his analogy is wrong. He is no Churchill and Reform are not the plucky English. Unlike the Allies in World War II, his "side" will not win in the end. For a start, the Americans will not be coming to their assistance - not late, not ever.

A better analogy for his faction's position would be the fall of the Berlin Wall in which Reform and their like could be compared to the communist rulers of Eastern Europe. For years the communists suppressed the aspirations of the citizens of those countries under their power. They did not allow dissent and their policies plunged those countries into a grey depression where all hope seemed forlorn. But the perseverance of those citizens who dreamed of a better life, who put freedom before their own safety, finally paid great dividends. The captives were set free. The former communist overlords are still there and looking for an opportunity to get back their power. They try to fool the people into believing that life was so much better back when they were prisoners in their own land. But they will never prevail. For Reform to think they will ever force women back into a place of subservience and disenfranchisement is as realistic as the Ku Klux Klan believing that one day Black Americans will be slaves on the plantations of the south again. Okay, there are many people with evil hearts who want  it to happen but, at the end of the day, their are more good people around and they will stop it happening - in the same way that good people eventually defeated Hitler and the Nazis.

RECOMMENDED:
"The world is full of foolish chumps" at THE GUARDIAN.