From THE DAILY STAR: 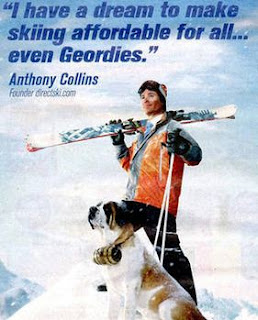 Geordies are furious after an advert suggested they were too poor to ski. The adverts have only been shown in publications across southern Britain and not in the Newcastle area.

TV’s Dinnerladies actress, Anne Reid, 75, who was born in Newcastle, said: “This advert is ridiculous and I am outraged on behalf of the people of Tyneside.” A spokesman for Newcastle City Council said Geordies were known for their sense of humour but that the advert had “gone too far”.

And Martin Callanan, Tory MEP for the North East, said: “This is a disappointing and outdated southern impression of Geordies.”

The company, which is based in Ireland, has apologised to anyone who found the adverts offensive but said the idea was based on research.