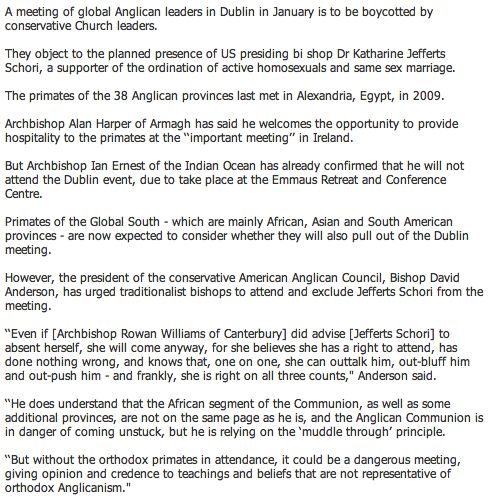 COMMENT: How active does a homosexual have to be in order to be considered unorthodox? Would he or she have to permanently lounge on the sofa in front of daytime television to remain kosher or is some light exercise (for example, walking  their dog to a nearby newsagent to pick up a newspaper) be allowed? I mean, I fully accept that homosexuals who cycle everywhere should be excluded from the Communion, but then such a stricture should apply to all people regardless of their sexuality. This is an ambiguous area that the primates really need to codify properly at their meeting in Dublin. Otherwise we could end up with a situation of some priests offering communion to thin, golfing homosexuals and other priests refusing communion to overweight homosexuals who won't even help with the washing up.