A new study says that penguins who engage in same-sex mating displays are flirty, rather than gay.

Incidences of homosexuality in the species have been well-documented and one male penguin couple at San Francisco Zoo were together for six years before splitting up in 2009.

However, researchers at the Centre for Functional and Evolutionary Ecology in Montpellier, France, say that the birds could be engaging in same-sex mating rituals because there were too many males or because the males have too much testosterone. 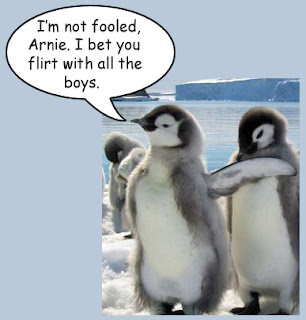 COMMENT: Look, I know it's not true, but it might be worth letting the idea "take roost" in the "Global South" etc. They'll believe anything down there and it could work to our advantage.

Thanks to Cathy for sending this story to me.