John Nienstedt, the Italian Catholic archbishop for the Twin Cities defended his right Monday to speak to fellow Catholics on social issues, and said a shrinking Roman Catholic church is no reason to consider a more liberal stance. He said he believes spiritual leaders have a duty to talk to their flock about issues they see as important — even if some of those views might be unpopular with prospective churchgoers.

"We're part and parcel of the culture, so it's important for us to be involved with those discussions and have our say," Nienstedt said. He said Jesus Christ directed his followers to "either be hot or cold, but if you're lukewarm, I don't want that. So we want people who live their faith. I believe that it's important that if you're going to be Catholic, that you have to be 100% Catholic. That you stand by the church, you believe what the church believes and you pass that on to your sons and daughters and your grandsons and granddaughters."

The Rev. Earl Simonson, priest at St. Clement, in Minneapolis (about to be closed by Nienstedt) said, "We just wait for the great archbishop to tell us what we're doing," Simonson said. "We're mere flunkies."

Separated at birth? Both comedians. Both adept at playing to the audience. Both good at making stuff up as they go along and saying the first thing that comes into their heads, no matter how daft. But can you tell which one is also a homophobic despot out to undermine the sovereignty of the US legislature? 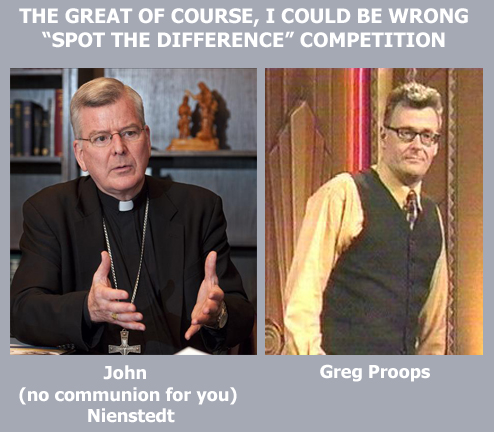