Things were looking grim when Bostie the budgie, presumably an escaped pet, found himself flying too far from land off the Devon coast. But he had a stroke of luck when he found a perch on the Royal Navy frigate HMS Westminster and dined in style in an officer's cabin.

The arrival of the yellow and green bird caused amusement on board the frigate as it took part in a training exercise off Plymouth. The animal landed on top of one of the sailors, was named Bostie – after a type of cross-bred terrier – and given a meal of bread, nuts and water.

But when a routine alarm sounded the budgerigar appeared to suffer a heart attack. Attempts to revive him failed and the crew gave their feathered friend a burial at sea.

Lieutenant Commander Nick Wood had spotted the tame budgie sitting on top of a communications box onboard. He said: "I'll miss Bostie. He was only in our lives for a brief time, but he made our day."

COMMENT: There, you see, the haters were right. Already the greatest fighting force the universe has ever known (even better than the Klingons) is deteriorating into total soppiness. The next thing you know we'll have Royal Navy captains walking around the poop deck with a persian cat in their arms asking their able seamen if they want a stroke. 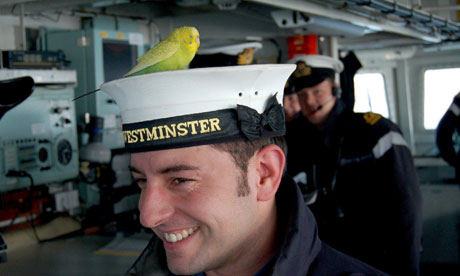 Thanks to the original Soppy Sheila for sending this sad, but somehow uplifting, story into MadPriest Towers.