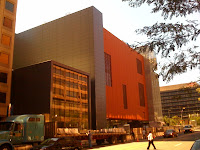 The National Museum of American Jewish History set to open next month in Philadelphia has adopted a unique compromise on an issue that pits religious teaching against economics — whether to open on the Sabbath. Officials had to decide whether to open on Saturdays, even though Jewish law forbids work and commercial transactions on the Sabbath. The alternative was closing on the day and turning away thousands of visitors — as well as up to a quarter of the anticipated admission revenue.

The museum will be open Saturdays, but tickets for Saturdays will not be sold on the museum's premises that day; they can be bought online or in advance, or outside the museum at locations to be determined. The gift shop will also be open Saturdays but will handle no cash that day; any credit card transactions will be processed after sundown.

COMMENT: I suppose the alternative would be to make no charge on a Saturday and just place a donation box near the door. That way the poor could learn all about Jewish people, as well.

(* At this point MadPriest was dragged away from his computer by various friends who were worried that he was about to embroil himself in another of those awkward situations.)