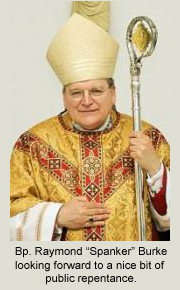 Catholic politicians who publicly support abortion or homosexual marriage and then seek to turn away from such “gravely sinful acts” must perform “public” actions of “repentance,” said Raymond Burke, the archbishop emeritus of St. Louis and the current head of the highest court at the Vatican, the Supreme Tribunal of the Apostolic Signatura.

"Sounds a bit kinky," says MadPriest, truck driver emeritus of Newcastle and supreme head of his own stationary cupboard, but not much else.