Posted by Charlotte at THEATRICAL MILESTONES:

Remember what I wrote in the last post about not exactly feeling pregnant, despite the persistent two lines?

. . . After a few hours and blood tests and through-the-roof blood pressure measurements, it's looking like my current hormone levels won't allow this baby to stick. Heck, the HCG levels was so low that the ER ob/gyn didn't even think Squirmy merited an ultrasound. I drove home with a sheet outlining instructions of how to collect any tissue or tissue-ish clots.

Then I watched the rest of The Biggest Loser. Numbers and percentages always give me solace, somehow. They're a pretense of fact, a description of some law of nature or logic that governs our existence. I knew going into this that, once the likelihood of actually getting pregnant at my methuselahic age had turned in our favor (yes, there's an algorithm for that), the chance of staying pregnant is about 50%. Of course, then, it never occurred to me, the eternal optimist, that the other 50% were actually a realistic part of the equation. Today's plan will be to find an ob who'll do an ultrasound to confirm or deny miscarriage. And to eat a pint of Ben and Jerry's.

Our older cat, Mia, crossed the Rainbow Bridge this morning. She was to have surgery to amputate her hind leg - she had osteosarcoma - and she crashed as they were getting her IV started. Three doses of epinephrine and the paddles, but they couldn't revive her.

. . . Sleep well, sweet kitty. May you be somewhere where there is lots of salmon (preferably pan-roasted), many birds to watch (particularly cardinals), and a soft window seat to lounge on.

My latest DDO meeting was a reminder that complacency is inappropriate in the process of discernment. My reflection submitted last month was basically an Essay, with insufficient depth and content. In particular there not enough reflection on mission and evangelism and how it is active in my ministry and life.

I came away feeling that I had let down both the DDO and myself. . .

I am told that I am being tried - but I wonder if it is me doing the trying, by not being fully what I feel that I am called to be - someone seeking to test a vocation. 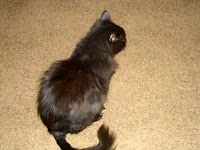 Maddie will be euthanized this morning at 10:30. She is going downhill fast - and the tumors are spreading. Her purr has now become a squeak. Please pray for her gentle passing.

Well, it's over. Gretchen (Frank's daughter) went with me - that helped. Previously, I never had trouble getting Maddie in her carrier. I believe she was really hurting this morning as she kicked and screamed - scratching and biting me. She had really gone downhill even more overnight. Once in she calmed down and rode quietly to the vet. She stayed quiet until the end. The vet was great. Of course, I cried - and am still doing so now and then. She will be sorely missed. I am confident she is in a better place.

Emmett Jarrett was my seminary field education supervisor for two years at the (then) Mission Church of St. John the Evangelist on Bowdoin Street in Boston. He also served as my mentor during my 6 month diaconal formation and early priesthood.

While we weren't always in touch, he remained a trusted mentor and friend.

Emmett died of cancer last Friday at the age of 71, in his home, surrounded by his family and community.

I've read his obituary and the articles about his life - even found an essay he wrote on line - and I still really can't get my head wrapped around the fact that he is dead. 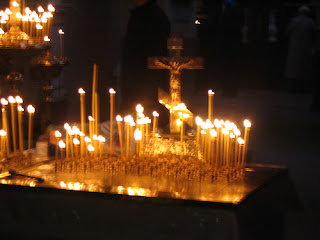