The head of a retailers group has written to the Pope asking him to petition the federal government to reverse its decision to restrict corporate use of the name of Australia's first saint. National president of United Retail Federation (URF) Scott Driscoll says the government's decision announced on Monday was a "knife in the heart" of business operators.

In the letter Mr Driscoll says the URF "has serious concerns" about the government's action, which will amend corporations law so anyone wanting to use a company name implying a connection to Mother Mary will have to seek ministerial approval.

"I implore you to make representation to the Australian government so that they are encouraged to reverse this concerning decision and thus allow the demand for merchandise recognising Mary MacKillop to be created and distributed more freely," Mr Driscoll asked the Pope in the letter.

MEANWHILE BACK AT THE FAMILY FIRM:

The Anglican Church in Sydney is in diabolical trouble. Already battered by the global financial crisis, the diocese is planning further savage spending cuts.

The archbishop, Peter Jensen, told the annual synod on Monday: "The financial issues are grave."

One of the biggest and richest dioceses in Australia, Sydney leveraged its huge investment portfolio in the boom and sold when the market hit rock bottom. After losing more than $100 million, it was forced to halve its expenditure. "There was considerable pain," the archbishop told the annual gathering of clergy and laity in Sydney. But it wasn't enough.

"In round terms, it seems possible that the amount of money available … to support diocesan works in the next few years is going to be reduced from the $7.5 million of 2010 to something like $4 million. Our major rethink of last year was only the beginning."

For a full and in depth analysis of the head of the Family Firm's little accountancy error check out Father Christian at GAFCON. 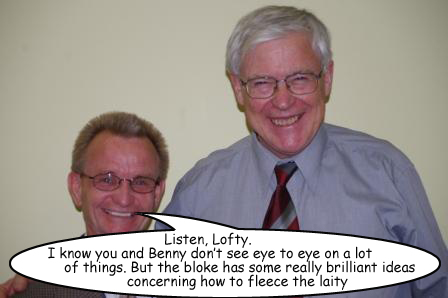