Church Action on Poverty has today (10 October 2010) written to all Anglican and Roman Catholic Bishops to press them to sign up their Diocese to pay a Living Wage. Despite the steps taken by the Methodist, Baptist, Church of Scotland and URC churches neither of the two largest denominations - the Roman Catholic Church and the Church of England – has taken serious steps towards respecting their low-paid workers with a Living Wage, campaigners say.

Niall Cooper, CAP National Coordinator said: “It is an important for Christians to take the initiative on social justice issues and lead by example. All church workers – administrators, cleaners, caretakers – should be paid the Living Wage of at least £7.85 in London, £7.15 in Scotland and £7.60 everywhere else. We must stand with people and families who are working hard but are still in poverty. For this reason, we are today calling on all Anglican and Roman Catholic Diocese to follow the example of the non-conformist denominations and sign up to pay their employees a Living Wage.“

On 1 October the National Minimum Wage rose from £5.80 to £5.93 for those workers over the age of 21. This ‘pay rise’ is insufficient, says the charity. For those hard working families struggling to make ends meet the 13 pence increase falls a long way short of a Living Wage. Only a Living Wage of at least £7.60 (or £7.85 in London and £7.15 in Scotland) is acceptable to help overcome the problem of ‘in-work poverty’, campaigners say.

In a statement they quoted Proverbs 14:31; "Those who oppress the poor insult their Maker, but those who are kind to the needy honour God." 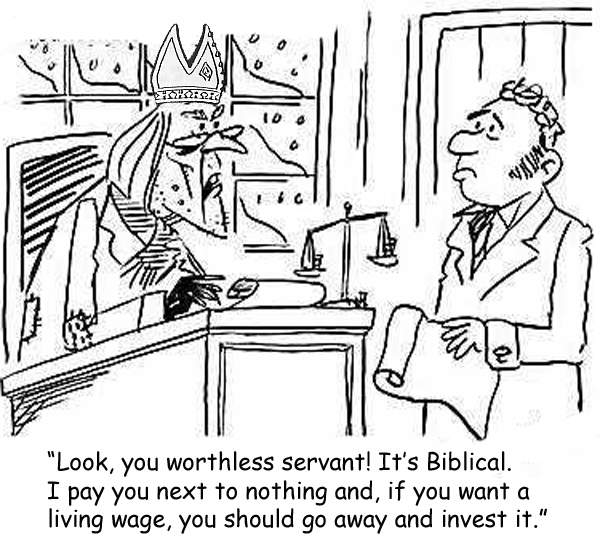