A Minnesota pastor, in a letter to the editor of a major newspaper, has sharply criticized the campaign against same-sex marriage spearheaded by his archbishop, John C. Nienstedt, of the Archdiocese of St. Paul and Minneapolis. Fr. Michael Tegeder, pastor of St. Edward Parish, Bloomington, took issue with the content of a 18-minute DVD sent by Minnesota bishops to more than 400,000 Catholics throughout the state. "The premise of the DVD," wrote Tegeder, in a letter published Oct. 2 by the Star-Tribune, "is that same-sex couples and their committed relationships are a grave threat to marriage."

The real threat to marriage, the pastor argued, is poverty, citing an earlier report on the effects of the economic downturn on marriage.

"In every serious study, poverty is the top reason for marital breakdowns," wrote Tegeder. "It is very hard to make the case that a small percentage of the population who bond with members of their own sex and seek to live in a committed relationship with members of their own sex could have anything but a positive effect on the general population's appreciation of stable, faithful, life-giving unions."

The DVD promotes a state constitutional amendment that would limit marriage to one man and one woman. Tegeder said the amendment "does not allow even for civil unions, and it would limit current rights for gay and lesbian citizens. We as Catholics can have our own beliefs about marriage. But we must recognize that people of other faiths and of no faith have conscientious beliefs as well." 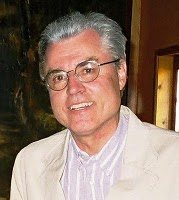 However, I am a bit worried, looking at his photograph, that Michael might be a vampire. I've seen "True Blood," you know. So I'm fully aware that they are quite common in the United States.

Thanks to Whiteycat for sending this tale of moral courage and speaking the word of God without fear into MadPriest Towers.